It’s that time of the year when spring starts to creep out from under winter’s canvas. Daylight has become my alarm clock by sneaking early, and before it should, each morning through the bedroom wooden venetian blind slats; and so my walking journey around Westroads Mall starts before it should. The mall looks the same at 8:00am as it does at 9:00am. I think most of the other 9:00am mall walkers must also have wooden venetian blinds in their bedrooms. I give my modest head nod, or my indiscernible move of the index finger, as we pass. And I wonder if I was really there an hour or so earlier. After three laps of the upper level I am ready for the two laps of the lower level. I head for the escalators; they are motionless.

I did the obvious and looked around a couple of times; moving my head through interrupted semi circles. The escalators weren’t working. And there was no On Point through the ear buds; just news but no news analysis. I looked down to my smart phone. The digital smart clock was showing 8:30am. And then I got it; escalators don’t have venetian blinds in their bedrooms. I don’t enjoy walking down non moving escalators so I set off for the stairs at the other end of the mall. I lightly gripped the handrail so my hand would slide the length of the first flight of stairs. I stared down at the stairs and absent mindedly started to count. And as I counted the stairs seemed to vanish in the distance. At the end point of the never ending stairs I could make out the faint glow of a long salmon pink tiled corridor; display windows lined the walls and there were black granite columns and Art Deco shop fronts.

The Degraves Street Subway and Campbell Arcade connect Degraves Street with Flinders Street Station. It was the start of our shortcuts to Collins Street when we took the train into town to go to the newsreels. On newsreel day we would be anxious to catch the first off peak train into the city; the first after 9:00am. We would gallop up Peel Street, cross into Davies Street, and when we got to the Dispensary look across Melbourne Road to see if a city train was stopped at the signal. If there wasn’t a train it meant a slow jaunt into Melbourne Road, past the Newport Post Office and shops to the station. A stopped train meant a frantic run to the station; buying your ticket just as the porter was closing the platform gate. And sometimes when my mind wanders I am back asking for a ticket into town.

After leaving Spencer Street Station the train would turn onto, and start to rattle over, the twisting viaduct running alongside Flinders Street and the Yarra. I remember when the viaduct carried four railway lines; they converged and diverged into other lines that arrived and departed from the thirteen platforms of Flinders Streets Station. It always seemed that the signals stopped the Williamstown train just before it go to Flinders Street; and you would watch the two carriage St Kilda and Port Melbourne trains scurry across the river on the Sandridge Bridge. Warehouses and factories edged the river and the pylons that supported the buildings reached down into the water. I remember the Glaciarium ice skating building, and the Allens factory. The Allens factory had a giant animated neon sign on the roof; Allen’s was on a lolly wrapping with green coloured Sweets just below.

When we had a spare sixpence from our pocket monies we would head down to Dashers to spend it on lollies. I don’t think we ever knew their real name but we had christened them Mr and Mrs Dasher because they moved so slow. Dashers was a traditional milk bar and was on the corner of Douglas Parade and Bunbury Street. Inside, at the back of the shop, was a wooden display case; a mind boggling treasure chest of little trays crammed with all types of loose lollies. This sugar happy land was part of the shops counter and was protected by a hinged glass lid. The lid was scratched, and made opaque in places from the countless times the knurled edges of threepence’s, sixpences, and pennies had been run along the glass. Spending our sixpence came with it’s own angst. We were possessed with tormented decisions deciding what was the better sixpence value; clinkers, fruit tingles, choo choo bars, black cats, spearmint leaves, milk bottles, bananas, musk sticks, or a packet of fags. Fags were white thin sticks of soft hard, sweet musk flavoured sugar with red colouring on one end; miniature fake cigarettes with a glowing tip. You would keep your packet of fags in your shirt pocket, and spend the whole day with a glowing white, thin sweet musk flavoured sugar stick hanging from your lips. Smoking was cool back then. Sixpence would buy you a bag of mixed lollies and you were lucky if it lasted through the afternoon. Milk bottles, spearmint leaves, bananas, and a host of other famous Australian lollies were made by Allen’s.

As the signal standstill wore on and the Yarra bank lost it’s fascination you started a search for distractions. The carriage became it’s own distraction. Each Tait carriage was it’s own sitting parlour. Bench seats ran across the carriage in aisles and partitions divided the carriages into small spaces; a collection of spaces was divided into compartments. An aisle of seats had its own sliding door and carriage window; each window had a wooden latticed blind. Lights hung from the patterned pressed tin ceiling and each carriage had luggage racks mounted onto it’s stained wood grain walls. A carriage was divided into first or second class and the inside was split into smoking and no-smoking. I don’t think we ever appreciated the Tait carriage for what it was. Most times a glance around the carriage and over your fellow passengers would only take a couple of minutes; then the disinterested would reach for their cigarettes and the wooden carriage would be filled with clouds of drifting smoke. Stubbed cigarettes quickly gathered on the floor. Smoking was banned on Melbourne trains in the late seventies. 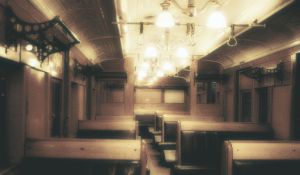 And for the next ten plus years I pondered why you could smoke on air planes but not on Melbourne trains. I can easily think back to when the first thing I did on a plane was to light a cigarette; the moment the wheels left the ground. The only time you couldn’t smoke in a plane was when it was on the ground. It seemed as if the entire plane was smoking a cigarette, pipe, or a cigar before the metal tube had reached it’s cruising level. Clouds of drifting smoke would hover just above seat level waiting to be recycled through the plane. And there came a time when smokers were restricted to the back of the plane. The last few rows were designated as smoking so you had to remember to request smoking when you were assigned a seat. If you forgot to request a smoking seat, or they had all been taken, as soon as the seat belt sign was off you gathered with the rest of the smokers at the back of the plane; and stood for most of the flight. Smoking was banned on all Australia domestic flights in 1987 and in 1996 on all Australian international flights. Smoking is now banned on most airlines in the world; and now I ponder why is there an ashtray in the lavatories of air planes.

When the Red Tait’s were being replaced by the Blue Harris trains and we were going into town we hoped beyond hope that our train would be a blue one. When we got to the Dispensary, and if we saw a red train was stopped at the signal we would dawdle to the station to miss it. And our fervent desire was that our meandering was fruitful and that the next train would be a blue one; we would wait breathlessly at the station without knowing if it was going to be a red or blue one. If you stood close to the platform edge and arched your back you could see an approaching Williamstown train. The signal would stop the train just past the workshops so the two carriage Altona swing door dog box or the Geelong diesel country train could stop at the station; or a goods train slowly make it’s way up the line. And if it was a blue one the wait for the signal to release the train was gruelling; excitement overcame us when it pulled into the station. We sat in agitated intoxication in the modern cavernous metal carriage and stared out through the large glass plated windows. In summer passengers opened the two sets of two sliding doors to move the air through the carriage; just as they opened the sliding doors in each seat aisle of the red rattlers on hot stifling summer days.

You used to change trains at Newport for Altona; the red two carriage swing door, dog box sea weed city flier, was kept on a small siding just past the station. And now Altona is a loop off of the overcrowded Werribee line; and the two carriage Williamstown train is now kept on the siding just past the station. On the weekends and late at night you change trains at Newport for Williamstown.

Allen’s was Australia’s largest confectionery company and it’s now owned by the international giant Nestle. Milk bottle lollies, the milky white colour vanilla flavoured miniature milk bottles are now a bag of banana, lime, caramel, strawberry and chocolate flavoured milkshakes. Fifteen year Australian lolly eaters are voting whether to remix black cats, teeth, or strawberries and cream. Allens, the Glaciarium ice skating building, the Wirth’s Circus buildings, and the other old warehouses and buildings that created Melbourne’s industrial landscape on the other side of the river are long lost memories. The area has been carved and shaped into the Arts Precinct and Southbank; Melbourne’s bustling river front, overflowing with clusters of arts organisations, cafe’s and restaurants, public art, entertainment, and stylish shopping.

I should adjust my rear vision mirror; or maybe visit Omaha’s Lauritzen Gardens Model Railroad Garden and chew on a bag of Minties.