The paddocks in central Nebraska were barren, and a sickly pale brown colour; most were covered in the corn stubble from last years crop. They had yet to become a sea of waving green as it was still too early in the year to be the start of spring. The early morning air was crisp, and the sky was clear and blue. Don Streeter led us across Brewster Field to the cluster of air plane hangers. Before we pushed his Cessna 172N from it’s hanger he unplugged and removed the engine heater, and did away with the designer cowling blanket. The sky was now a filtered blue with a few stratus clouds making their unhurried way across the horizon. Don completed the pre-flight inspection and we taxied onto the Holdrege airport runway; the barren, sickly pale brown colour paddocks were soon below us.

Years ago a trip to the airport was enjoyable and speedy. There were no long queues or waiting; you arrived ten minutes before your flight and walked through a gate, and onto your plane. When I think back, I vaguely remember walking out a gate at the Essendon Airport passenger terminal to a TAA DC-3 resting on the tarmac. I must have been ten or twelve years old; we were flying from Melbourne to Tasmania with mum and dad, and my brother for a holiday. It would have been Trans Australia Airways, instead of Australian National Airways, because Aunt Bet’s husband’s sister worked as a hostess for TAA. We walked up the stairs into the plane, and then uphill along the aisle to get to our seats. I don’t remember flying to Tassie; but I remember going to the Blow Hole at Port Arthur. We must have rented a car, and dad must have braked or swerved; what happened next became the “when we were in Tassie” story. I must have been sitting on mum’s lap because I was thrown forward when the car lurched, and hit my chin on the dashboard; my teeth cut into my gums, and my mouth became a bloody mess. I don’t remember it happening but the story got retold and retold; causing me to remember the event. Whenever it was told mum’s calmness and bravery, and spur of the moment nursing skills, were talked about in great detail. And I was the brave little soldier who didn’t cry when he hit his chin on the dashboard of the car. 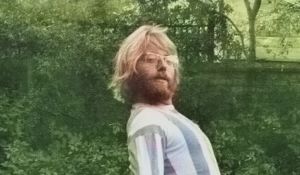 I had disordered hair and a beard, and would have been wearing an Indian kurta, scarf, jeans, and sandals when I walked through the gate and onto a BOAC plane at Delhi airport. Delhi was my last stop after drifting through the Middle East, and into India along the ill defined Hippie Trail. I spent most of my time in Delhi wracked with intestinal pain; alone in a stark room, curled into a fetal position on a flimsy mattress. One afternoon when I was shuffling through the crowded, colourful, laneways and streets of Delhi, I stopped and rested in a small park. I only have uncertain memories of negotiating the price of a plane ticket to Melbourne with the young man in the park. I gave him Greek drachma’s, and we agreed that the stranger I had just met would return in the morning with a ticket, and we would ride to the airport together. I would pay him in US dollars for his service when we got to the airport. Early next morning I waited in the park; the stranger appeared. I only have scattered memories of the Tuk Tuk ride to the airport; I gave the young man the last of my US dollars.

As I walked into the airport I wondered if I was clutching a genuine BOAC ticket. I only remember the food being served on a plate and using cutlery; the knives and fork came sealed in plastic sleeves. Some would say that airplane food was dreamed up by a culinary school drop out, but I remember the food as being outrageously delicious; I’d just spent the last few months wandering through Turkey, Iran, Afghanistan, Pakistan, and India eating mostly street vendor food with my hands.

I did a few other international airplane trips during the seventies. Melbourne’s brand new Tullamarine Airport had replaced Essendon Airport, and you now boarded your plane through a jet bridge. Security was some bloke giving you the once over, and if he thought you looked OK and weren’t a galah, then you boarded the plane. Back then, airports didn’t look like shopping malls. Going to the airport was stress free; you didn’t have to run the gauntlet of duty free shops, remove your shoes and belt, load up plastic tubs with stuff taken out of your bags and pockets, or worry about body imaging. You’d show up at the airport fifteen minutes before your flight and walk to the jet bridge with your friends or family; after a few kisses and hugs you were on your way. 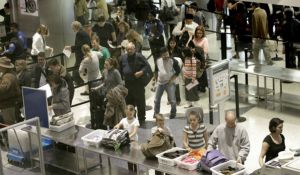 I thought back to those times at Tullamarine as I joined the writhing security screening line of bored and excited international passengers at Houston Intercontinental Airport. The line folded back on itself several times; the swaying people, shifting backpacks, rolling luggage, and moving carry on bags caused the line to constantly change it’s shape. The writhing line split into smaller lines as it moved toward the security screening stations. It was soon my turn to remove my shoes and belt, and load up the plastic tubs with the contents of my carry on bag and pockets; I stepped into the X-Ray machine. Upon stepping out of the full body scanning machine I was approached by a TSA agent. When they were slipping on a pair of latex gloves they asked if I would prefer my body pat down in private; I stood on the rubber mat in the designated space near the main screening area, with legs apart. The agent waved a hand held wand over me, and then explained they were going to run a latex gloved hand up one of my legs, across my groin, and down the other leg. As the TSA agent was thanking me for my cooperation I asked what had triggered the pat down. The imaging machine had detected an outline of a memory card embedded in my thigh.

It took all my strength to resist the overwhelming urge to walk through all of the imaging machines; similar to walking through a transit station’s X-ray metal detector to enter a safety zone. The TSA agent farewelled me with a nod, and I was soon sitting in the departure lounge, sipping coffee and trying to recall if I had put the camera’s memory card in my shorts pocket when it fell onto the airport floor in Chicago, and then put it back into the camera case when we deplaned at Houston. Could it have left some type of magnetic image on my thigh; somewhat akin to being irradiated with highly charged radioactive particles from a Gamma Bomb explosion I thought.

Afternoon Tea used to be an everyday event, but now it’s more likely to be something special in a hotel or restaurant. Nowadays, Afternoon Tea and High Tea are often used interchangeably; however most people use High Tea to suggest an extremely formal Afternoon Tea. Back when, Afternoon Tea was known as Low Tea and was served in the late afternoon. It included a teapot of loose tea with milk and sugar, and a selection of cucumber, tomato, tuna, ham, sardine, egg, and smoked salmon sandwiches; scones with butter, clotted cream and jam, and assorted cakes and pastries were also part of Afternoon Tea. Afternoon Tea was served on a lounge, or low table. High tea was an early evening meal eaten between 5:00 and 6:00 pm. It substituted for both Afternoon Tea and the evening meal, and consisted of cold meats, eggs, cakes, and sandwiches. High Tea was eaten at the main, or high table.

The Strangers Corridor restaurant serves members of Parliament and their guests, or strangers, when the Victorian Parliament is sitting; when it’s not sitting the public are welcome in the restaurant. Strangers Corridor is a wood paneled room with red velvet chairs and stain glass windows; accents of gold, and red and pink tones suggest a sense of taste and sophistication. I think one of the best kept secrets in Melbourne is the Afternoon Tea served at Strangers Corridor; freshly baked scones with jam and cream, exquisite pastries and finger sandwiches on tiered stands, and freshly brewed tea.

It was a non-sitting Parliament day when I slowly walked up the sweeping steps of Parliament House. After the associate checked my name on their High Tea reservation print out list they escorted me through the door to the security screening station. I loaded up the plastic tubs with the content of my shoulder bag and pockets, and asked if I needed to remove my shoes and belt. I stepped into the walk through detector and paused for a moment; I wondered if I should mention the magnetic image of the memory card embedded in my thigh. Knowing that the layered strawberry vanilla slices, and the cucumber finger sandwiches were waiting I said nothing. I walked through and out of the detector without any alarms sounding, and was escorted through Queens Hall to Strangers Corridor. I eased back into a red velvet covered chair in a traditional leather booth, and as I watched the light shining through the stain glass windows play onto the white linen I slowly sipped champagne, and ran my hand along my thigh to feel for an embedded memory card.

Travelers today spend a lot of their time waiting in airports. World airports are now morphing into community spaces; you can while away your airport hours in yoga rooms, beer halls, butterfly gardens, leisure zones and rooftop swimming pools, shop in luxury stores, and eat in upscale themed restaurants as you wait for your connecting flight. I would suggest airports start opening exclusive Tea Rooms, tucked away from the hustle and bustle of their other shopping and dining areas so you can idle away a few hours of airport time enjoying a posh Afternoon Tea. And you would only have to go through security screening one time.

The Best Places for High Tea in Melbourne

This Is What Your Flight Used To Look Like

One thought on “What If A Cucumber Sandwich Had Wings”