A few days ago I went online shopping; but it wasn’t my first time buying something online. All of my previous purchases have been from Amazon. I don’t really think buying something from a multinational technology company that focuses on cloud computing, digital streaming, artificial intelligence, and e-commerce fits my style of shopping. I like shopping in a shop that specialises in one type of anything; or a department store that has a number of shops spread throughout it’s building. Myer Melbourne is an iconic name in Australian retail; it’s Australia’s largest department store. Myer’s eight storey Art Deco building in Melbourne’s Bourke Street Mall is the company’s national flagship store. I remember my first Myer experiences as a young boy. When mum went into town with nanna during the school holidays she’d take me along; she’d go into town to make a payment on her Myer lay-by, or for cooking demonstrations in the Gas and Fuel Company’s presentation kitchen.

As a young boy I thought the Myer store was luxurious and opulent; I was in awe of the modern spaces that celebrated what we all might have some day. Mum and nanna window shopped in all of the departments on their way to the lay-by counter; I had trouble keeping up with them as they shuttled between each floor in the Myer lifts. Shoppers weren’t allowed to work the lifts. Myer had smartly dressed lift operators in each lift who controlled everything the lift did; from opening and closing the doors, the direction and speed of the lift, and how many people were allowed in the lift. They’d open and close the doors by pushing buttons, and control the speed of the lift by pulling or pushing levers, or turning a metal wheel.

As the lift operator closed the lift doors you always heard

The lift operators wore name tags; most of the male operators were called Alfred, and if you weren’t an Alfred you were a Maurice. The Myer lift operators stood in the corner of their lift.

Some of the lifts in other department stores had a small seat in the corner in front of the operators panel of buttons; it folded down and out from the wall. A lift operators work day was spent sitting on a small padded seat, pushing buttons and turning a metal wheel; I suppose it’s not much different from today’s IT workers who sit on a padded chair, tapping on a keyboard and clicking on a mouse.

After mum paid a few shillings off her lay-by we’d take the lift to the Myer cafeteria so mum and nanna could rest up over a cup of tea and scones; I’d get a Tarax Pineapple or Cottee’s Passiona.

I don’t think anybody goes to Amazon to spend an afternoon of leisurely window shopping, or to rest up over a cup of tea and scones. I find Amazon somewhat tedious for browsing and relaxed shopping. It’s said that Amazon US has over 160 million products alone in it’s Clothing, Shoes & Jewellery category, 87 million items in Home & Kitchen, and 62 million in Books. If you’re buying at Amazon you’d better know the name of what you want to be able to search it out and add it to your cart. I’ve stopped buying at Amazon and started shopping at online department stores, and online speciality shops. The other day I went online shopping for a cordless weed eater at the website of a big box hardware shop. In the The Land Down Under a whacker is a term for an idiot; someone who’s a fair dinkum dill, so Australians call grass trimming machines weed eaters, whipper snippers, or string trimmers. As I right clicked through the different brands of wackers I’d click on one of the different close up images of a wacker area; and it became a little off putting. I started to experience this strange feeling, and imagined I was looking at a wacker’s private parts. I felt more comfortable using the 360 view.

I clicked an eater into my virtual trolley, and moused my way to the online checkout. I choose to have the eater delivered to the near by, big box warehouse site for pick up. I clicked on order, and a few day later headed to the big box warehouse to pick up my cordless weed eater.

It’s difficult to understand a whacker; sometimes their word and actions are contradictions. The Pickup Associate disappeared into the row of pickup shelves, and in no time reappeared carrying my weed eater. I signed the order received paperwork as J McAdam.

My name is David John McAdam and I’m called by my second Christian name John. It’s said that mum wanted to call me John but her mum, my nanna, wanted to call me David. Mum got her way and so did nanna; which has led to confusion throughout my life. It took me until adulthood to grow into John as my name. Before starting school I was always John; and then I became David for half of the day. I was a meek and shy young boy throughout Primary and Secondary school, so when the teachers called me David I never spoke up to tell them the story of my name. I was known to them by my second Christian name John; mum’s name for me. But in the play ground and school yard all my friends, and other classmates, called me John. It wasn’t so bad in Secondary School because most teachers just called you by your last name; so I was McAdam. I think it was probably around Fourth or Fifth Form; I was sixteen or seventeen, when I summoned the courage to tell the teachers that I was called by my second Christian name John. Starting at Footscray Technical College was a new beginning; the Chemistry department was one of the smallest at the college and so there were only a handful of full time chemistry teachers. There were only twenty plus other students in my class and so by the first week of class everybody knew the story of my name. And so I started to grow into being John.

Googling John McAdam gives an infinite number of listings for John Loudon McAdam; the father of the modern road. John was a Scottish civil engineer and road-builder who was the inventor of the macadam road surface; if only I was that John McAdam. Searching with the query John McAdam Omaha rewards you with: “in the past, John has also been known as D J Mcadam, David J Mcadam, David John Mcadam, John D Adams and John D McAdam”. Since being in the US I’ve tried to explain the story of my name to the various national and state agencies, banks, business, organisation, institution, shops, companies, and other entities that I’ve needed to interact with; obliviously that hasn’t eliminated the confusion of what I am called. Whenever someone calls me any of the above names my first response back is: “I’m called by my second Christain name John”. It’s not easy growing into a name.. 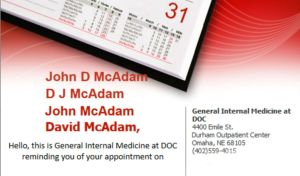 Some scientists have reasoned that there’s a good chance you look like your name; that you somehow grow into the facial features society associates with a name. And other research suggests that people link certain expectations to particular names; so your first name will shape how people perceive your age, personality, and how good you are at your job. When I was David I’m sure people saw me as sweet and charming; and I probably would have grown up to be be seen as somewhat similar to David Bowie. And now that I’m John people most likely see me as interesting, clever and funny; it’s interesting that the name John has been identified as the number one of the top 10 names for male geniuses.

When I think back, I start to understand the Pickup Associate whacker’s actions; as they looked searchingly into my face they didn’t see a David but instead saw a John.

I recently read that the most popular 2019 names for baby girls are Isla, Olivia, Posie, and Aurora; and for boys they’re Milo, Jasper, Atticus, and Theodore. I wonder how people will perceive them when they become adults; and what they will become when they grow up. I think it’s a sure bet that anyone named Atticus will have a round face, and will be an outstanding lift operator.

The History Of Ecommerce: How Did It All Begin?

This Is Why We Have Middle Names in the First Place