No trip to Fremantle, or freo as the locals call it, would be complete without taking in a couple of the must-do things listed on the countless “What to do when visiting Fremantle” websites. Each of the different websites lists the same what to do activities: visit the Roundhouse, hang out at the pristine beaches, escape to Rottnest Island and meet the quokkas, enjoy fish and chips at Fishing Boat Harbour, stroll the Fremantle Market, sample a boutique beer at Little Creatures, wander the Cappuccino Strip, stretch your legs at Esplanade Park, and tour Fremantle’s infamous prison. I’ve always said, if you’re visiting somewhere new, the first thing you need to do is something to give yourself an insight into the values and spirit of that place. I’d suggest wandering the downtown streets, finding a place to drink with a local, and starting up a conversation with a stranger. On my first day in Fremantle, I signed up for the following tours, a historical walking tour, a cemetery tour to visit Bon Scott’s gravesite, the lead singer of AC/DC, and a Behind Bars tour of Fremantle’s heritage prison. 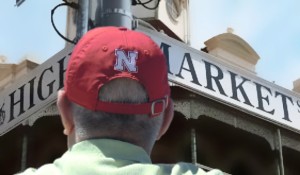 The convicts transported to the Swan River Settlement built the roads, houses, churches, and buildings that would become the city of Fremantle, as well as their own prison. It was known as the Convict Establishment and records suggest, close to 10,000 convicts passed through it until transportation ended in 1868. The Establishment was renamed the Fremantle Prison, and it continued as a place of incarceration until decommissioned in 1991; it’s now a world heritage site.

It was a hot midday afternoon when I headed off for The Convict Prison tour. As I got to the corner of Market and High Streets, I realised I’d be stepping inside a one time, maximum-security prison, and confronting the realities of life on the inside. I thought of stopping to get some Parma Shapes or Chicken Twisties to nibble on during the tour. But I realised any food from the outside would be confiscated at the gate. I was thinking of the gruelling and demanding time I was in for and decided I had best take in a carb-loading snack before the tour, so I stopped at Fremantle’s oldest tea room.

Culley’s is known for its mouth-watering pies and their daily baked delights that include: matchsticks, lamingtons, and vanilla slices. I ordered a pie with chips and salad for my pre-prison, carb-loaded snack. As I squirted tomato sauce on the pie and raised a fork full of pie and salad to my mouth, I thought how my snack would be a godsend to an Inmate Distiller; a pie and sauce and chips fermenting in a plastic bag with hot water would produce tremendous prison alcohol.

We gathered around our guide; he started the tour with an introductory story of Fremantle Prison from its convict origins in the 1850s until its closure as a maximum-security gaol in 1991. He finished the introduction with several cautions. 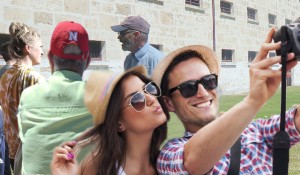 Our Convict Prison tour guide led us through the cell blocks and exercise yards. Even though writing and drawing on the walls was not permitted, I couldn’t help but notice the graffiti, poems, and pictures scrawled on some of the walls of the long sandstone hallways. The Convict Prison tour guide explained that in the last few months of the prison’s operation, the rules were relaxed to introduce art therapy, and so graffiti and artwork spread across the walls of some of the cells and hallways.

From 1888 through to 1984 the gallows room was the only place of legal execution in Western Australia. Forty-three men and one woman hanged in the gallows room. As our tour guide described the formalities of a hanging I took hold of the railing, bent over and looked down into the thirteen feet of the long drop. 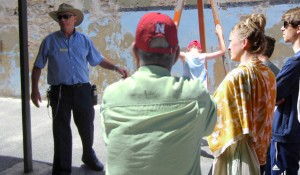 Corporal punishment wasn’t uncommon in Australian penal colonies, and the Convict Establishment was no exception. I’m not sure if the young fella volunteered, or if his girlfriend volunteered him, but as quick as a flash, his arms and legs were tied to the lashing post. Just as the young fella was about to be lashed, our guide called a stop to it. Apparently, the Establishment staff sometimes refused to inflict corporal punishment on the convicts. So before the cat of nine tails could be used, Flagellators had to be recruited from Fremantle. No one in the tour group volunteered to be a Flagellator.

An hour and a half of walking through cell blocks, exercise yards, and up and down stairs caused me to wonder if I was suffering from a carb deficiency, and therefore my need for carb-loading food. As soon as the tour finished, I headed to Culley’s for a cup of afternoon tea and a daily baked matchstick, lamington, or vanilla slice. As soon as I took the first slow bite of the firm vanilla yellow custard between the two buttery pieces of puff pastry, I once again experienced the heavenly taste of a vanilla slice; just as I did on Sunday afternoons. Sunday afternoon was mum’s baking day, and the kitchen counters were filled with lamingtons and butterflies, vanilla slices and matchsticks, and occasionally a sponge cake and scones. Mum moved her Sunday baking to Friday or Saturday afternoon if Friday and Saturday nights were visitor nights. 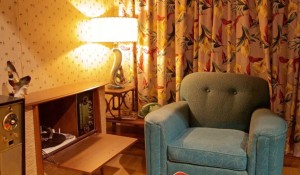 The lounge room was set aside for receiving visitors where they were entertained, with adult conversation, a pot of tea, and the results of mum’s baking. Mum had furnished the lounge room with the formal elegance dad’s working wage allowed. Crocheted dollies sat on the back of the sofa, and the two lounge chairs and her crystal sparkled from within the glass china cabinet. A PMG 300 Series Bakelite rotary phone sat on a small table alongside the crystal cabinet. Over time a His Master Voice, our first television, replaced the phone and it sat supreme in the lounge room. Mum and dad’s friends, the Slaters, would visit on a Saturday night, and their visit was a small gift from heaven. It wasn’t that I was allowed up the passageway and into the lounge room, but more so because mum always left me a couple of her vanilla slices on a plate on the kitchen table. Before I went up the passageway mum would sternly warn me,

Just say hello to Mr and Mrs Slater, be on your best behaviour and keep your feet off the chairs.

I dreaded when it was our turn to visit the Slaters in Coburg because it meant I wouldn’t be eating mum’s vanilla slices and dad would be driving past the dark foreboding bluestone walls of Pentridge.

Pentridge began as a stockade in 1851, and between 1857 and 1864 it was transformed, into a typical British prison with wings radiating from a central hall for each prisoner to have their own cell. High walls with sentry towers were built from bluestone quarried on-site and enclosed the prison. Pentridge became known as The Bluestone College. Whenever I caught sight of the high imposing bluestone walls, my mind worked overtime imaging the violence and depravity inside those walls. I’d fall into a huddled silence on the back seat of the car, not daring to look at the threatening walls, fear gripped my mind, and my heartbeat would race., The fear sent shivers down my spine and caused my hair to stand on end. Dad would start to talk slowly and quietly; he was the only soothing, calming presence.

Some say Pentridge was witness to scenes of great violence and depravity. It housed Ned Kelly, Australia’s infamous bushranger before, and after his hanging at the Melbourne Gaol in 1880; his remains were moved to Pentridge in 1929. 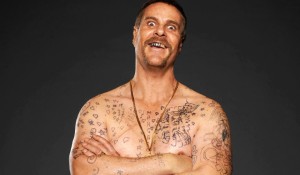 The notorious underworld character Mark Chopper Read spent time at Pentridge. He’s known for his semi-autobiographical fictional crime novels, children’s books, and paintings that include a series of Ned Kelly portraits; some depicting Ned as heavily tattooed, like himself, and with machine guns or hooks for hands. The Australian film Chopper launched the career of Australian actor Eric Bana. Pentridge housed Ronald Ryan, the last man executed in Australia; he was hanged at the gaol in 1967. Pentridge officially closed on May 1st, 1997.

Bluestone College is being redeveloped and transformed into an urban village, that will include a public piazza, restaurants, a shopping centre, and a 15-screen Palace Cinema. I wonder if Culley’s would be interested in opening a shop in Coburg.