On some Saturday and Sunday afternoons, our gang of five would ride their bikes to the Warmies instead of Nelson Place and the Williamstown piers. The Warmies were around the bend in North Road from where it dead-ended with the Strand. Folklore explained the Warmies as being the hot water from the Powerhouse boilers being pumped into the Yarra and mixing with the cold waters of the Yarra River and Hobsons Bay. A steam-powered ferry, a small floating road guided by two large chains strung across the river mouth, carried cars, bike riders, trucks, and pedestrians across the mouth of the Yarra River at Newport, to a thin strip of concrete at Fishermans Bend; the end of Williamstown Road. The locals called the ferry the punt.

The Warmies was where we learned first-hand about fishing. We’d watch and talk about how to catch flathead and what was biting in the bay with the Newport fishermen as they cast their lines into the swirling eddies of lukewarm water. There was always a collection of assorted cargo ships slowly entering and leaving the mouth of the Yarra. You could almost reach out and touch the ships as they made their way upriver to the sheds and cranes of the Victoria docks; we’d idle away the afternoon ship spotting and daydreaming about the adventures, romance, and intrigue that were lurking in exotic foreign ports. The punt would leisurely wait on the Newport or the Fisherman’s side of the Yarra for the ships to pass. If a procession of ships were leaving or starting their slow journey up the mouth of the Yarra, it became a long wait for the punt, and cars and trucks with their motors turned off became backed up along North Road to the Strand. 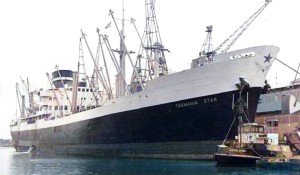 I never knew the names of the ships but their funnels hinted at their identity. A red funnel with a blue star on a white background was the Blue Star Line, a blue funnel was the Blue Funnel Line, and a black funnel with two white bands was the British East India Line. A ragtag collection of nondescript ships made up the rest of the convoys. As each ship slowly passed, I tried to match the flag flying from the stern with their name and country of registration; and soon, I was daydreaming about the adventures awaiting me in unknown far off lands.

The pushbike gang fell apart as we grew into young teenagers and matured into youthful adolescents. Andrew Lambrianew and I became a gang of two. We spent Saturday and Sunday afternoons at Sandy Point, the Williamstown Piers, the Back Beach, and Nelson Place and seldom went to the Warmies. But when either of us felt the urge to demonstrate our burgeoning manliness and disrespect for authority, we headed to the Warmies to ride the punt without paying the fare collector for a ticket. I’d casually push my bike to the front of the punt and rest it against the guard rail around the pulleys, guiding one of the chains and wander off to the other side of the punt. As the punt slowly glided across the Yarra, I’d move in lockstep with the fare collector but on the opposite side. As the punt neared Williamstown Road, I’d make my way back to the bike, and as soon as the fare collector started to lower the punts ramp, I was on my bike and standing on the pedals to muster all the force I could for a quick fare evading escape. I’d hide among the waiting cars and trucks for a couple of punt crossings before repeating the perilous fare-dodging trip back to the Newport side of the Yarra.

Sometimes I thought about riding my bike back to the Newport side of the river; that meant riding down Williamstown Road, through industrial Fishermans Bend to Spencer Street, down Footscray Road, and along Whitehall to Douglas Parade. An 8 to 10-mile bike ride that any young teenager should have no worries completing in a couple of hours. The thought of such a trek sent adrenaline rushing through my veins. One fateful Sunday afternoon, the adrenaline mixing with the excitement of evading the fare collector sent an explosion through my brain. I was standing on the pedals as soon as the fare collector lowered the punt’s ramp and pedalling down Williamstown Road on my way to Newport. I made it as far as the overgrown weed paddocks alongside the runway of the Commonwealth Aircraft Corporation factory. During the fifties and up until the mid-sixties, the airstrip was known as the Riverside Drag Strip; and the surrounding sand dunes and salt marshes were a perfect place for the local petrol heads to have endurance trials with their garage hobby cars.

A few years after the gang of five fell apart, my brother discovered himself as a petrol head with a couple of new mates, Graeme Kelly and Ron Templeton. They tinkered with what I called an Elliott Ness car; I couldn’t tell a Ford from a Holden or a Vanguard back then, so the car could have been a Buick. The Kelly house was just off Douglas Parade and a block or so from North Road.

On weekends they’d push the car from Kellys to the punt, then to the marshy grasslands and the runways surrounding the Commonwealth Aircraft Corporation. While they were pushing the Buick, I was busy with my adolescent adventures at Sandy Point, the Williamstown Piers, and Nelson Place. A couple of times, the promise of driving the car if I helped push it to Fishermans was just too much. It was my teenage years, and it became my first time driving a car. I don’t remember if the fare collector charged us for a car pushed onto the punt.

It was the second time I’d driven a car. As a youngster, I often took dads work car for a drive on weekends. He parked the Vanguard on the street outside of the house. I’d ask him to unlock the door so I could take it on a drive; he never left the keys in the car, so I had to be the engine. I knew the gears and the sound of an overworked car engine because, on the school holidays, I’d ride along with dad as he drove around the suburbs calling on lending libraries so they could restock their collections for the next two weeks. In the boot were crates of bestsellers, recirculating books, and all-time favourites for the lending libraries to choose from. I watched him change gears and listened to the engine as we drove the busy streets of Melbourne’s suburbs. When I drove the Vanguard, I could hardly see over its enormous steering wheel, but as soon as I gripped it, I was Gelignite Jack Murray.

My feet and legs couldn’t reach the brake, clutch, and accelerator, but my left arm could reach the column gear shifter, and my hand became glued to it. I’d start each afternoons endurance trial by revving the engine with a series of throaty roars, pushing my left foot down on the floor, and thrusting the shifter to first. I allowed the engine to purr in my throat through first gear until it reached a desperate guttural roar; a signal to a change into second gear. I always crossed the finish line in every Redex Round Australia Reliability Trial in first place.

After experiencing the thrill of driving the salt marshes and runways in the Buick, I imagined the turn-on of conquering the marshy grasslands in Uncle Ken’s Amilcar. The Amilcar is a French sports car from the 1920s. Uncle Ken’s Amilcar sat under the shade of the fig tree in Nanna’s front yard. Even though he always said I’m going to fix it up, I don’t remember the engine ever being started or the car moving. It was easy to picture myself pushing the Amilcar down Wilkins Street and onto the punt. At Fishermans Bend, I gave it a series of desperate pushes off the punt and onto the marshy grasslands. I jumped into the driver’s seat and gripped the steering wheel in the same way I’d held the Vanguards steering wheel. The engine roared into life, and I was flying across the dunes and salt marshes. It was part art and part science; my larrikin antics combined braking, accelerating, and steering to create a glorious mix of noise and violence sliding sideways between the sand dunes at 100 mph.

As a young teenager, you never think about how your escapades prepare you for the future. As I was evading the fare collector on the Newport punt, I never thought about crossing the Mopan River on a hand-cranked ferry. I spent a little over a week in Belize in the mid-nineties. It was a short time after Queen Elizabeth and Prince Phillips visited, so I missed the arrival of the Royal Crates. The boxes that precede the Queen wherever she goes contain china, silver, crystal, linens, the red carpet, the Queen’s private toilet seat, and the small crowns for the Royal Vehicles. I also missed the Royal Party’s visit to San Ignacio, where they were guests of honour at a luncheon at the San Ignacio hotel. They dined on Heart of Palm Salad, Medallions of Beef Tenderloin, Steamed Cho Cho, Steamed Corn Tamalitos, and Sour Sap Ice Cream. During my visit, I made do with a small bite to eat at a restaurant in Belize City with the US Ambassador.

I wonder if the Royal Party’s drive along the Western Highway to San Ignacio was similar to mine. It seemed as if our four-wheel drive was constantly dodging walking villagers, the occasional car and bus, and various animals. The trek to Xunantunch and El Castillo was a bumpy ride from San Ignacio to the Mopan River along a road carved through the overgrown tropical jungle. At the river, a ride-for-free, hand-cranked ferry with room for two cars got you across the river; Xunantunch was about a mile away, along a narrow, rising hilly road. Some say you have to be a fit climber to reach the top of El Castillo; I only managed the top of the first flight of stairs.

After several deep breaths of warm, humid air, I thought back to riding the punt from the Warmies to Williamstown Road without a ticket and gasping for air while pushing the Buick to Fishermans Bend. I never thought of it as an omen for a future ferry ride to the Mayan city of Xunantunich.