I’ve been going through hormone therapy during the last couple of months to reduce my testosterone levels to cause existing prostate cancer cells to shrink or slow their growth so that targeted radiation therapy will be more effective. Yesterday I had markers implanted in my prostate in preparation for five weeks of five days a week radiation therapy. I remember the conversation with my radiation oncologist as he explained why and how I’d be having markers inserted into my prostate.

The radiation oncologist went on to explain the CT Simulation, the last step before radiation therapy, but I’d stopped listening. I was thinking about things in the past that needed accurate aiming to be successful.

Moving the trough lolly calls for a keen eye and a dead-on aim. Against-the-wall urinals tend to collect a lot of liquid, and so most Australian men’s trough urinals have deodorising blocks resting in them to neutralise the smell of the urine that doesn’t wash down the drain. No self-respecting Aussie male is going to call the scented blocks a deodoriser; they know them as a cake, puck, biscuit, or trough lolly. The standard Aussie men’s trough urinal is the classic stainless steel hinged grate style. A hinged floor grate covers a base tray with a drain to stand on. Urinals in hotels and footie grounds usually have several trough lollies sitting in the base tray. You can bet a penny to a quid that after a few rounds of beers with the boys, the challenge is to see who can move the lolly the furthest. 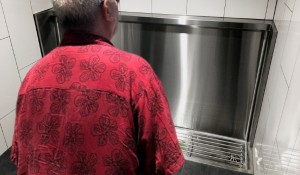 Some drinkers say the trick to moving the lolly is to stand back, unzip the fly and have at it. Others believe the secret to moving the lolly the furthest is controlling the stream’s dribble and splashing and keeping up a constant force and velocity on the lolly from the start of its journey down the base tray. I maintain the secret to moving the lolly, and to keep it moving, is in the angle you make your stream first hit the lolly, and then changing the slant and the angle around the circumference to create currents and small eddies at the base of it. You’ll produce a similar effect on the lolly’s movement, as they do on a curling stone by sweeping the ice. But it’s without question that the one who moves the lolly the furthest is the person with the best muscle memory and hand-eye coordination and the most accurate aim of their stream.

During the late sixties and early to mid-seventies, I taught Math and Science at several different, Victorian Education Department Technical Schools in Melbourne’s working-class inner suburbs. The cuts and yard duty was a staple punishment for any student who may have committed a misdemeanour. The cuts were being belted across the hand with a three-inch wide, two-foot-long leather strap. They were a part of everyday school life. If you dished out the cuts, you had to be on the money with your aim every time you gave anyone some of the best. Any boy could get the cuts if they were: talking in class, not doing their homework, not bringing the right books to class, forgetting their apron for woodwork, sheet metal or fitting and turning, being rowdy and unruly in the corridors, leaving the school grounds at lunchtime without a lunch pass, and wagging school. Boys didn’t know how many cuts or the type of cuts a misdemeanour called for; most of the time, they waited until the strap was raised above the teacher’s head and listened for the command.

The backhander wasn’t given out lightly. It’s an extremely difficult cut to master, and not every teacher could give a backhander. Just as the strap hits the palm of a boy’s outstretched hand, you give it a flip so that it curls onto the back of their hand. I think teachers became masters of the backhander by practising flicking chalk with their straps off the staff room table and onto the floor. You needed to smash a lot of chalk to smithereens to become a master of the backhander. Aim and a deft wrist movement had to become one fluid action to deliver a legitimate backhander. I never gave the cuts to any boys. I was afraid my aim on their small quivering hand would be so imperfect that I’d miss the target and hit my shin.

In the early seventies, I wandered Europe and the Middle East along the ill-defined hippie trail. Local buses and trucks transported me through Turkey and Iran and from Kabul through the Khyber Pass into Pakistan. I’d eaten street food throughout Turkey, Iran, and Afghanistan, and for some unknown reason, I was still dropping solid ones onto the porcelain. During my last days in Kabul, I began to feel feverish and nauseated and started to suffer from chills and diarrhoea. I became worse on the train journey from Pakistan to New Delhi. Back then, a third-class train carriage was compartments with two wooden plank seats facing each other with a second row above them. At least five people squeezed onto each plank, and if you were sitting on the lower plank, you looked through your legs for most of your journey.

There were no cooling fans, you slept sitting up, and in most cases, no toilet facilities, apart from a small space at one end of the carriage with a door and a hole in the floor. I spent considerable time in the small compartment with a hole in the floor. After the first couple of times, I became careful about what I had in my pockets. I spent most of my time in New Delhi huddled in the corner of a dark, dank room with stomach pain, nausea, extremely watery diarrhoea and fatigue, and lurching, sometimes crawling, to a small room with a hole in the floor. Even though I could accurately aim at a target when I was looking between my parted legs, a skill most squat toilet users wished they had, I knew that diarrhoea, when combined with stomach cramps and stress from using new muscles in my legs, would guarantee splash-back.

I came by my skill to accurately aim while looking between parted legs as a young lad playing Tunnel Ball once a weeknight at the Williamstown Youth Center. It was a toss-up between Tunnel Ball and Iron Goals as to which one was my favourite Youth Center game.

To play Tunnel Ball, teams line up alongside each other, with their players in a straight line, facing the same direction with their legs apart, thus forming a tunnel. The player at the end stands back from the tunnel with their knees bent and head down so they can watch a ball as it travels through the legs. The player at the front of the tunnel propels the ball through their legs and into the tunnel. Each player then guides and speeds the ball through the tunnel with their hands, and when the ball reaches the end of the tunnel, the end player picks it up and runs to the start of the line. The tunnel shuffles down, and the ball is propelled through the tunnel of legs again. The game continues until all players have carried the soccer ball to the head of the tunnel; the fastest team wins. To win, you have to be comfortable having your head in someone’s crutch between their parted legs and to be able to focus on a ball in motion, estimate its speed, distance and direction, and reposition your legs for it to travel between them. Just before the ball reaches you, you may have to move your feet, so it goes through your legs, and give it a push with both hands to speed it through the tunnel.

During my time travelling throughout South East Asia, I always hit the hole when dropping hard ones. I used a technique that combined skilful aiming and deft positioning know-how. 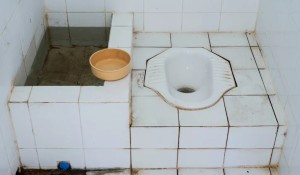 I’d place my feet around the hole and slightly further apart than my shoulders so that my legs spread out over the hole. Once positioned, I’d squat down until my thighs just about touched my calves. And then I’d let my arms rest on top of or on the sides of my knees. Before starting the drop, I’d look down between my legs and give my hips the same circular motion as if I was twirling a hula hoop. As soon as I reckoned that my aim was on target with the hole, I’d stop moving my hips. Sometimes I added a little dash to my squatting technique. If one of my legs began to feel tired or fell asleep, I’d bend to one side, causing the squat pressure to only be on one leg. And I felt so confident about my aim and my skill to re-aim accurately and quickly that I’d stand up halfway through a squat to give my knees some relief.

Since I had my gold markers inserted, I’ve been following the price of gold on The London (over-the-counter) OTC market. It has historically been the centre of the gold trade, and it’s estimated today to comprise approximately 70% of the global notional trading volume. The current value of my markers is about $35.00, so I’m waiting for a rush on gold before deciding if I should sell them.

Bio-Toilets On Trains To Keep Tracks Free Of Yuck

Cruel And Unusual Punishment At Schools