I think my reluctance to look at dead bodies in their coffins started when my father died. I had to be eighteen or nineteen at the time, and I vaguely remember the open coffin in the front of the room at Nelson Brothers. The Nelson Brothers funeral parlour was in a really cool Art Deco building on the corner of Douglas Parade and Stevedore Streets in Williamstown. The building is still there. I’m not sure what’s on the first and second floor, but the ground floor now has a dentist, coffee shop, a false teeth and appliance clinic, a thrift shop, and a TAB shop for betting on Australian horse racing and sports. 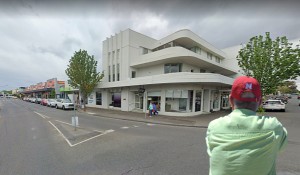 Dad’s coffin was open to allow family and friends to take one last look at his head, shoulders, and chest. I sat at the back of the room, wondering what a dead person looked like; would they look like they did when they were alive. Would dad be lying on his back, feet together, with his arms folded over his chest, would the eyes that danced with light be open and staring or closed, would his deathly white skin be waxy and pale with artificial makeup, and would his lips be pale and cold. I decided I didn’t want to look at dad. I still wonder what clothes mum picked out to have him dressed in for the coffin. Mum would think of his funeral as a formal occasion and so would dress him in a suit, instead of the casual clothing he enjoyed wearing. I only remember dad wearing a suit when he went to lodge, and sometimes when he went to work.

The first time I looked at a dead body was ten years or so after dad’s funeral. In the mid-seventies, Burma was slowly opening its borders and granting some visitors a conditional visa to visit the country. The capital, Rangoon, had a worn-out British colonial appearance. People mainly shopped at street markets, and everyday life seemed to be a continual test of resourcefulness and endurance. The black market was a way of life. After spending the government allowed one week in the country, I left for India. As much as it tried, Burma didn’t prepare me for Calcutta.

Outside of the Calcutta airport was a teeming city of people, buses, hand-pulled rickshaws, Ambassador taxis, cows, and chaos. In the ’60s and ’70s, The Lonely Planet was the backpacker’s guidebook for travelling overland through the Far East, and it became my handbook for India as it had for Thailand and Malaysia. I must have taken a tuk-tuk from the airport to a Lonely Planet recommended backpacker’s hotel. There can be no other reason, other than a frighting, nightmarish, Fifth Element tuk-tuk ride that would leave me unable to remember where I stayed in Calcutta; I think it was old Calcutta. Calcutta’s streets were decorated with well-maintained colonial-style buildings, but any suggestion of a British way of life had faded. Whenever I left my hotel and wandered into the streets, I was surrounded by hordes of badly deformed beggars, hawkers, and young men asking if I was interested in keeping company with a woman, or a young boy. The sacred cows nonchalantly roaming the narrow streets and laneways were untouched by the chaos. The teeming footpaths were covered with motionless bodies covered in flies and frozen in contorted poses. I thought I was looking at dead bodies, but as soon as I approached the corpses, they’d turn over, sit up, and jerk their hand toward me with a pleading cry of baksheesh.

After a couple of days wandering around Calcutta, I began to notice some of the bodies never turned over to ask for baksheesh; and I started to think that maybe they were indeed dead. The Lonely Planet guidebook comes with free admittance into the brotherhood of travelling backpackers which includes a license to ask fellow backpackers at Lonely Planet recommended hotels and hostels any questions.

Fact is sometimes stranger than fiction; Varanasi was my next stop. I wasn’t going to Varanasi though to look at dead bodies. I was going there to look at the small room where George Harrison sat at the feet of Ravi Shankar and learned to play the sitar. And then I would, at last, understand the avant-garde, psychedelic fusion of Western and Indian classical music, with vaudeville and music hall music, that the Beatles used to produce Sgt. Pepper’s Lonely Hearts Club Band. On my first morning in the Old City of Varanasi, I woke to the sound of music, ringing bells, and chanting. As soon as I stepped outside of my Lonely Planet recommended backpacker’s accommodation I was engulfed in a thick, sweet, heady smell of incense; I remember my eyes stinging from the sandalwood scented smoke. I wandered the cobbled laneways hoping to stumble upon Ravi Shankar’s old place, but it seemed the maze of laneways only led to the Rover Ganges and the ghats.

A ghat is a wide, set of steps leading down to a river; there are eighty plus ghats along the Varanasi riverfront. The Ganges River is a sacred body of water to Hindus. They worship and offer their prayers to the Goddess of the river Ganges. They also believe bathing and splashing themselves with the holy waters will rid them of their sins, and casting the ashes of their deceased into the Ganges will transport their soul to heaven, thus causing them to bypass the cycle of rebirth. Two of the Varanasi’s ghats are for cremations the others are for bathing, washing clothes, and worship rituals.

I saw the smoke before I saw the fires. I didn’t know if I was stepping onto a cremation ghat or standing in front of one. I was standing with burning bodies laying on large piles of firewood; everything was only somewhat visible through the clouds of sandalwood scented smoke. The bodies were wrapped in brightly coloured shrouds, similar to Egyptian mummies. But the pyres seemed to be alive; steadily hissing and steaming and spitting burning embers into the air. I watched the bodies as they burnt. At the end of the cremation, the ashes, and any remaining bones, were carried into the river. Because a lot of India’s poor can’t afford enough wood for a complete cremation half-burnt bodies end up in the river; if there’s no wood for the cremation the wrapped body is put in the river and set on fire.

At nearby ghats, Hindus bathe in the sacred waters and submerge and splash themselves with the holy water to wash away their sins. I watched as a man walked slowly into the river with his arms outstretched and a look of ecstasy on his face. Men were having their heads shaved, women were washing clothes, children were diving and swimming in the holy waters, and buffalo were being washed. I left the ghats covered in human ash, and with images of bloated and charred bodies floating in the river.

On my last day in Varanasi a smiling man, who asked only for a small offering of baksheesh, led me through the maze of cobbled laneways to Ravi Shankar’s small house. He pointed to a window.

As the years went by, the passing of time invited me to the funeral services of friends and family. I started stealing furtive glances at the dead bodies from a distance; all I could see above the top of the open coffin was their nose and hair, and so I began walking closer to look into the coffins. I knew cosmetics were used on the bodies, but as much as I looked, I couldn’t see any superglue keeping their eyes shut, the cotton stuffed down their throat and nose, or the stitches keeping their mouth shut. I remember looking down into the coffin of a family member who I’d seen a few days earlier in the hospital when he was in a coma. I looked closely at his temple; there was no sign of a wadded bandage or the hole drilled through his skull to drain blood from his brain. Now when I look at bodies, I scan their head, face, and hands trying to find a clue as to how they’re made, to look like they did when they were healthy.

For some a situation, an event, a person, or anything connected to their senses triggers a buried memory. A while back, an invitation to my first costume Halloween party caused me to remember the ghats on the Ganges River, and I decided to dress as a Varanasi cremation ghat instead of a cowboy or magician. I remember foraging the Omaha op shops for discarded doll parts to glue to a pyre I’d made from Pier One curly willow branches. I surveyed the finished costume, and the doll parts were too small for the pyre, so I glued the heads, arms and legs, and bodies in contorted poses onto paper plates to make four place settings. I complimented each serving with al dente spaghetti and macaroni, and discrete splashing of diluted food dye to represent the brain and other human organs, and then glued the place settings onto a sheet of Styrofoam and cut an opening in the centre of the table for my head. I doused the table costume in sandalwood oil before wearing it to the party.

Ever since I began looking at dead bodies in their coffins I’ve wondered, if you put your ear onto their stomach would you be able to hear liquids bubbling and swooshing around inside them.

In Pictures: Calcutta In The 1970s

Sgt Pepper’s at 50: The Greatest Thing You Ever Heard Or Just Another Album?