Back when I was growing up in Williamstown there was little choice as to what footie team you barracked for; if you were born and raised in the working-class western suburbs you barracked for Footscray. Fooyscray’s mascot was the British bulldog, and the boys were collectively known as the Doggies. I’ve forgotten the number of cold, dank, winter Saturday afternoons I stood on the sloped terraces in front of the grandstand at the Western Oval. I stood with the brotherhood of Doggie faithful; the air, thick with the perfume of meat pies and tomato sauce, and cigarette smoke and beer. We drank our beer and cheered the boys on with affectionate obscenities and insulting encouragements. And we welcomed the last quarter with the tribal ritual of a pie in one hand, and a beer raised in the other; our salute to the sound of the siren that started the final onslaught. It was a penny to a quid that the four n twenty would be either hot enough to burn the roof of your mouth or on the cold side of warm. 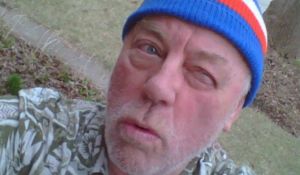 Not long ago I went back to the sacred ground. I thought about taking a couple of Melbourne Bitter long necks in a paper bag, or a thermos full of hot tomato soup and some sandwiches wrapped in greaseproof paper, but instead went empty-handed. I stood in silence. The turnstiles were gone. The driveway we had walked along had gone. The scoreboard had gone. I stood in front of the metal statue of Ted and remembered the times we barracked from the terraces, and now he stands at the entrance to where the boys no longer play. Back then it was the Western Oval, but we called it the kennel. It’s now the Whitten Oval, and the boys use it as their training ground; its main attractions are a souvenir shop, a childcare centre, and a conference and convention centre. The kennel had changed.

I didn’t want to change from being an Aussie. I went back to Australia every couple of years after I first moved to the US. I didn’t do tourist things; I stayed at mum’s place, spent time with aunts and cousins, and hung out with friends. I was back home living in Oz. It was before e-commerce; before you could buy genuine Australian foods online and have them delivered to your door. When I left to return to the US I’d stuff my bags full of Cherry Ripes, Violet Crumbles, Twisties, and Minties. I didn’t bring back hats emblazoned with kangaroos and koalas, T-shirts printed with G’day I’m an Aussie, or any plush Aussie animals and toys. 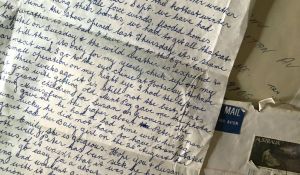 I have always tried to keep in touch with what was happening back in Melbourne, and Australia. Years ago an aerogram or a letter from mum, stuffed with newspaper clippings of Footscray and Williamstown news, would arrive in the letterbox every month or so. Whenever I wrote to mum and reminisced about her sausage rolls, shortbread, pavlova, and meat pie her handwritten recipes for them would be in the next envelope in the letterbox. I still have some of my favourite mum recipes.

When I lived in Springfield, Illinois, I’d spend an afternoon, every couple of weeks, in the library catching up on what’s happening in Melbourne three weeks ago by reading the most current copy of The Age on the newspaper rack; it was a time before the internet.

As time went by the trips back to The Lucky Country became every three to four years; and then even longer. When I left to return to the US I didn’t have to load up my suitcase with Cherry Ripes, Violet Crumbles, Twisties, and Minties because the Internet had arrived; I could go online and order all the Clinkers, Freddos, or Fantails I wanted. And my news and updates about what’s happening in Melbourne and Australia were now tomorrow’s headlines; I was reading The Age, and ABC News online. A large selection of Australian foods that included sausage rolls, pasties, biscuits, jams and spreads, and other tastes of Oz was just a mouse click away, so I no longer asked mum for any of her recipes. 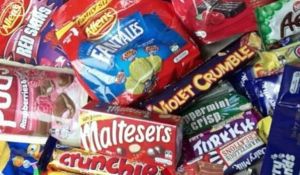 YouTube evolved with the Internet and I watched the doggies playing their brand of footie sitting on a couch, instead of standing with the faithful on the sloped terraces in front of the grandstand; though I still saluted the boys with a few cold ones. I searched YouTube for The Masters Apprentices, The Twilights, Billy Thorpe and The Aztecs, Ronnie Burns, and other singers and groups I don’t remember, who performed at Berties, Sebastian’s, and the Thumpin Tum; Melbourne’s legendary live music discotheques of the sixties. And as I found the black and white tributes I sang once again, loud and out of key, to myself; when I looked up I would see the sea of umbrellas hanging from the ceiling of the Tum, and the velvet curtains and antique furniture of Berties. I would sit with Andrew Lambrainew in the front seat of his white Ford Fairlane, outside the Ormond Hall in Prahran, drinking from long necks to prepare ourselves for the music and girls of Opus. It seemed as if there was a mod and rockers street fight every second Saturday night; we would lock the car doors and watch the floundering fighters. And so we divided our Saturday nights between Berties, Sebastian’s, The Thumpin Tum, and Opus. 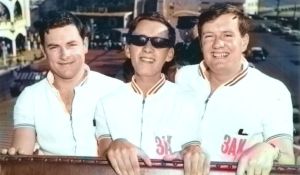 And when I shouted the words of Let the Little Girl Dance in disharmony with Grantley Dee I was back standing on the esplanade at Williamstown Beach. If you looked through the large back window of the 3AK mobile studio broadcast caravan, you could watch, and listen to, the AK Good Guys Grantley Dee and Lionel Yorke playing the hits. During the summer holidays the AK Good Guys team did their radio shows live from popular Victorian beaches; when I wasn’t at the beach mum’s Bakelite kitchen wireless was tuned to 3AK.

YouTube also allowed me to watch Australian television shows of the sixties and seventies. I giggled once more at the double entendres and ad-libbing that was the staple of In Melbourne Tonight with Graham Kennedy, Hey Hey It’s Saturday, Blankety Blanks, and The Paul Hogan Show. It was like I was back in the Springfield library reading the newspapers from three weeks ago, but this time I was watching Australian television forty years ago. I didn’t watch any current Australian television; I didn’t know what to search for. My Melbourne and Australian television YouTube watching was as up to date as my last visit back to The Lucky Country. 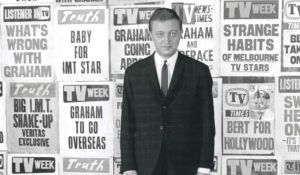 Beechworth is a well preserved historical gold rush town in northeast Victoria, Australia. Ian was dressed in period costume; waistcoat, faded black boots, low-slung belt, hat and moleskin trousers. His face was surrounded by long grey whiskers that resembled a mutton chop beard. He was our guide for our walking tour of Beechworth’s Historic and Cultural Precinct. The Precinct is made up of honey-coloured granite buildings that were the home of the Superintendent of Police, Telegraph Station, Courthouse, Powder Magazine, and the Chinese Protector’s office. 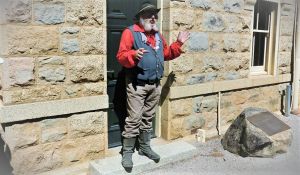 At the start of the tour Ian gathered our small group outside one of the heritage gold rush buildings to introduce himself, and for the group to introduce themselves. Ian heard me say I was from Nebraska in the United States, and from then on I was the yank. Ian regaled us with a blend of humour and facts, and when anybody answered a question incorrectly he pretended to berate and mock the innocent drongo. I carefully constructed my answers to Ian’s questions around what I had learned in school about Victoria’s gold rush history; Ian was impressed with the yank. And Ian was further impressed with the yank when I reacted to an Ian joke, or risque question, with a response laced with my own humour. I chatted with Ian for a short time after the tour; he thought I was American and I never did tell him any different.

Tirau is about a forty-minute drive from Rotorua. It’s a quaint New Zealand, North Island town and is known for the corrugated iron dog and sheep buildings on the main street. Across the road from the corrugations is The Twisted Café. We stopped in for lunch at The Twisted Café, and after I had chosen a slice of homemade egg and bacon pie I started chatting to the lady behind the counter. 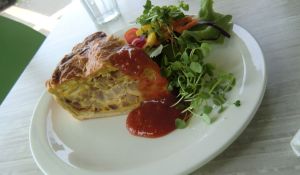 I don’t think many supporters wanted the Footscray Bulldogs to become the Western Bulldogs, or for the boys to move away from playing footie at the old home ground. I didn’t want to change from being an Aussie. I’ve now lived longer in the US than I did in Australia. A lot changes over time; I just don’t think you really notice it when you see it changing every day. The Aussie tradition I’m still holding onto is wearing shorts. 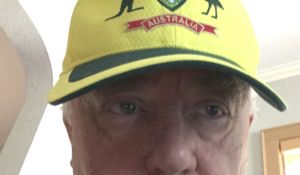 I’ve worn shorts from when I first lived in Lincoln, Nebraska; way before you ever saw the United Parcel person or the postman in shorts. I still don’t wear a ball cap but I might start wearing a bright yellow Cricket Australia one with the Australian coat of arms on the front. I don’t think I’ve ever worn Australia on my sleeve so maybe I’ll wear it on my head.

After all that out of key loud singing my mouth feels like the bottom of a cocky’s cage; I think I’ll go out back and down a few neck oils.