It’s early October and the leaves have started their colour change; the treetop yellows, browns and greens are at work creating the pattern of an Autumn quilt. It is early yet. The frost hasn’t arrived but the Halloween costumes, decorations, and treats are filling the shops. Pumpkins are slowly appearing on the porch steps and Halloween decorating is trying to add a spooky, scary bad dream to neighbourhoods. Not growing up with the tradition of Halloween I have never really appreciated the rituals, the practices of trick and treating, and the celebration of dressing up to usher in the winter season; besides, in late October in Melbourne, the trees are blooming to herald summer and daylight savings is preparing Australian’s for backyard barbecues and endless sun-drenched days on the beach. There’s a lot of things about Halloween I don’t understand. I thought it was a day when souls in purgatory are remembered; and during the night before, All Hallows Eve, poor people go door to door to receive food in exchange for praying for all the dead sinners whose souls are still waiting for purification before going to heaven. 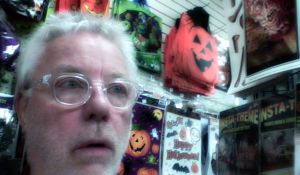 As I wandered through the makeshift Halloween aisles of a local shop I started to ponder over all that I don’t understand about Halloween. Why don’t people go door to door dressed up as poor people? And why do people give out candy? According to the National Retail Federation’s 2016 Halloween Consumer Top Costumes Survey spending on Halloween costumes in 2016 is expected to reach $3.1 billion and the most popular costumes will be:

Over the last thirty years, I’ve kept the light on twice for the tricksters and treaters. I insisted on being schooled and coached the first time; it was my first Halloween as a homeowner greeter and I wanted to be accomplished when the little youthful urchins and waifs came to the front door. I rehearsed my message of kindness. It was trick or treat themed, an acknowledgment that I understood the task ahead of the little orphans; receiving food in exchange for praying for all the dead sinners whose souls were in purgatory. I assembled an abundant assortment of little Snickers, Reese’s, Babe Ruth’s, M&Ms, Milky Ways, 3 Musketeers, and Twix and crowded them into a medium-size bowl.

The doorbell rang and I nervously opened the door and met my first two little poor people. I muttered the first of my rehearsed lines: And who are you. I didn’t expect their name’s just the name of who they were for the night; the superhero, the prince or princess, the mythical person they had disappeared into in an attempt to escape their destitution for one night. They just held up a plastic orange bowl the shape of a mid-size pumpkin; their wide eyes looking up at me. I tried again with my second well-rehearsed line: Do you have a trick for me. The two personas non grata’s just held the orange bowl a little higher. And a worried look started to inhabit their parents face. I gave the scamps some Snickers. It was like a scene from Ground Hog Day the second and third time the doorbell rang; my well-rehearsed lines delivered to the outcasts at the door; the bowl, plastic bag or paper shopping bag just pushed forward; the Snicker’s dropped into the ragamuffin’s container. I trusted that the pariahs would remember those souls in purgatory. 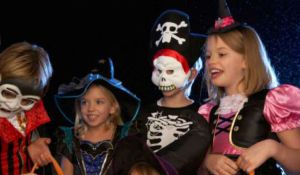 It was several years later when I kept the light on again. And I was prepared. It was a warm evening for late October and so I decided to sit outside and wait for the costumed revellers to arrive. I had also reassessed the meaning of Halloween; it was all about the candy. Forget those souls in purgatory, forget the mischief-making, and forget the presence of otherworldly spirits. My neighbour joined me in the driveway way and we sat waiting, discretely sipping cold beers. At our feet were two vessels, each overflowing with candy. Both porch lights were on and as soon as we noticed a dressed up merrymaker become distracted by the porch lights we beckoned them with: Candy over here, and we let them help themselves.

Halloween in the Mall seems to capture the true celebration and superstitions of All Hallows Eve. Shop assistances stand in the doorways of the shops with their arm extended holding a plastic bucket of Halloween Candy Corn or Tootsie Rolls, and focused on texting or posting to Facebook and interacting with Periscope with their other hand whilst the endless conveyor belt of little pranksters shuffle on by.

When it comes to present-day Halloween it seems greed is good and the goal is to see how much candy you can get inside a pillowcase, backpack, or a brown paper grocery bag. It is estimated that a quarter of all the candy sold annually in the U.S. is purchased for Halloween. The American Heart Association is reporting that today about one in three American children and teens is overweight or obese. Furthermore, among today’s children, obesity is causing high blood pressure, type 2 diabetes and elevated blood cholesterol levels that previously weren’t seen until adulthood. Also, the American Dental Association is concerned about an increased risk for tooth decay because of the length of time that Halloween sugary food is in the mouth.

They want everybody to have a healthy Halloween mouth and caution that dental decay and damage done by sweet sticky treats can lead to root canals and crowns, or a tooth can become abscessed and infected. I think this epidemic of childhood obesity, and health and dental concerns is related to too much Halloween candy. It goes without saying that the tricksters collect enough candy at Halloween for two months or more of continuous eating. It seems now is the time for action. It’s time to stop giving out good candy. It’s time for second rate candy, and to give out things that aren’t candy, and things that aren’t edible. Second rate candy giveaways could include:

I don’t remember any celebration when I was growing up where lollies were the celebration. Back then lollies were a hard-earned delight. You would go hunting for discarded Tarax or other soft drink bottles to take back to the corner Milk Bar for the bottle refund. And it could be several weeks before you would even find one bottle. If you had saved your pocket money then you may have as much as sixpence to spend on a bag of mixed lollies. Our gang would gather outside Dasher’s on Saturday afternoons; just because. I don’t think we ever knew the owner’s actual names but we had christened them Mr and Mrs Dasher because we decided that they moved so slow. Dasher’s was at the corner of Douglas Parade and Bunbury Street and was a typical Milk Bar.

At the back of the shop was a wooden display case; a mind-boggling treasure chest of trays crammed with all types of loose lollies. This goldmine was part of the counter and had a hinged glass lid. The lid was scratched and made opaque from the countless times youngsters had run the knurled edger of their threepences, sixpences, and pennies along the glass as they fastidiously selected their lollies from the assortment in the case. Dasher counted out your choice of lollies and handed over a small white paper bag that would hold licorice allsorts, clinkers, fruit tingles, choo choo bars, black cats, mint leaves, or milk bottles. It was luck if your bag of mixed lollies lasted through the afternoon.

And Halloween is trying to make inroads into Australia. From reading online Melbourne’s hometown newspaper it seems it is becoming popular with Australia’s little one’s; no doubt because of extreme marketing of lollies in supermarkets and everyone’s exposure to American television shows. But it still hasn’t taken off really big with adults. Some pubs and clubs have Halloween themed activities and parties, but most adults prefer to dress up for a Halloween BBQ or a house party. Australians will use any excuse for a party. 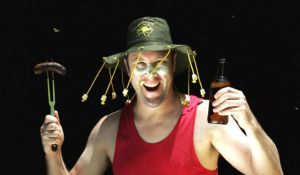 Just as Australia has some of its own traditions, rituals, and celebrations for Christmas I think if Halloween is going to be celebrated in Australia then it should also be uniquely Australian. Instead of looking towards America for costume inspiration and settling for an Anna or Elsa, or an off the rack Captain America costume in an Australian Target store, I think that Australian’s should give serious thought to dressing up as either; Mr. Squiggle, Dame Edna Everage, a koala up a tree, B1 or B2 from Bananas in Pyjamas, Sir Don Bradman, or Steve Irwin. When the small V B Stubbies or Slim Dusty’s come knocking on the door the only lollies they could choose would be fantales, freckles, jaffas, steam rollers, or minties.

For my next Halloween I think I might dress up like a joey in a pouch and hand out cobbers.