The silencer on my Nissan Cube recently developed a deep throaty gurgle. It goes without saying that driving your car anywhere within spitting distance of a car repair place is going to set you back a couple of hundred dollars. The car repair professional called soon after I’d left the Cube to be worked on and said they couldn’t get an aftermarket muffler and that they’d have to buy one from a Nissan dealer. In the same sentence, he threw out that the Cube needed a new front tire, which means two new tires, and a new battery. It’s not that I doubted the professional, but it’s hard to believe that Cube mufflers are so scarce. A Google search revealed my brave little toaster was now deceased. The Nissan Motor Company discontinued the Cube from it’s US lineup in 2015. And now, whenever I sit in the Cube, I muse over some of the cars I’ve known, but are now no more, which include the Commer, Vanguard, Austin, and Holden.

I think it was the Austin A40 that took us over Pretty Sally. Pretty Sally Hill is a gap in the Great Dividing Range. The Great Dividing Range is Australia’s largest mountain range; stretching from the northeastern tip of Queensland, through New South Wales, and then into Victoria. The road over Pretty Sally was the gateway to the Highlands of Victoria from Melbourne: And it was part of the original Hume Highway to Sydney. By the 1930’s Pretty Sally, because of a sharp turn near the crest of its hill, was known as a road accident magnet. It was a long, slow, climb up Pretty Sally Hill, and cars were often strewn on the shoulder with violent boiling radiators. The highway was shifted to avoid the steepest section in the 1960s. In 1979 the now closed Pretty Sally Roadhouse was used as the setting of Fat Nancy’s in the film Mad Max. 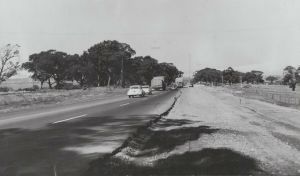 Mum started her repeated warning early on the day we had to cross Pretty Sally. She was rocking imperceptible in her passenger seat and it seemed every few minutes was asking dad how much further to Pretty Sally. She kept repeating that we have to be across Pretty Sally before dark: And asking how many more hours until the sun goes down. We didn’t know what Pretty Sally was holding for us; only that we couldn’t be crossing The Hill at nightfall. My brother and I fell into a huddled silence on the back seat fearing that something out there awaits us and knows our names. And then mum announced; we won’t be there before dark, and she fell into a deep quietness. It was twilight when Dad’s “we’re here” caused my brother and I to unfurl from our shivering fetal positions and fix our eyes on the road ahead. Dad started to talk slowly and quietly to the A40; a soothing, encouraging chant. The car slowed as it entered the incline of The Hill and it slowed even more as we passed the hissing, steaming, defeated cars on the shoulder.

We didn’t know what fate was going to befall the wide-eyed families inside. Mum stared at the cars and the innocent victims as if she knew their fate. The A40 began to lurch forward and dad gripped the steering wheel and his knuckles turned white. Just as the car was about to give up, dad in one quick motion double-clutched and shifted down a gear; the car was renewed with momentum from its second gear. Mum asked quietly; Bob are we near the top. We laboured past other stalled and wheezing cars on the shoulder. Our eyes grew wide in fear as we watched the mums and dads leave their cars. The A40 conquered the hill that twilight but we knew that something unknown was out there and knew our names. For years to come, we convulsed at the mention of Pretty Sally.

For many years dad worked at Forward Library Supply. The office was on the first floor of the Block Arcade; Room 1, First Floor the Block, 98 Elizabeth Street Melbourne. Back then the Block was just an arcade and not known as a heritage shopping arcade and you went to The Hopetoun Tea Rooms for a quick cuppa and a plate of sandwiches; mum and nanna would never think of it as an authentic federation style tearoom experience. Forward Library Supply was a wholesale bookseller to libraries and schools and rented books to lending libraries. Most rental lending libraries were in shopfronts in the main streets of Melbourne’s suburbs. They would either rent crates of current best sellers or choose from a selection of favourites from Forward Library Supply’s book stock; after a given time the books were exchanged for another crate or other selections. Book readers would either join a lending library for a quarterly or yearly subscription or would borrow a book for threepence a book. Dad called on Melbourne’s lending libraries and completed his monthly circuit in a Forward Library Supply car. I think his first car was a Vanguard and then a Holden station wagon.

The boot of the Vanguard would be loaded with crates of bestsellers, books being recirculated from lending libraries, and a collection of favourites for lending libraries to choose from; dad carried a swatch of dust jackets of all the books in the trunk. I’m not sure how Dad kept track of all the books that were at each library, what was being returned and recirculated, and what was selected from the favourites collection. I suppose he had his method; probably similar to the dabbawalas of Mumbai. I think he worked to the same efficiency as the dabbawalas of Mumbai; it’s claimed dabbawalas make around one mistake in every six million tiffen deliveries.

I remember a few days on school holidays that I partnered with dad when he did his rounds of the libraries. A lending library would select the books they wanted from dad’s swatch of dust jackets; my job was to find the books in the trunk and to re-shelve the returned books on the trunk floor. The job was a lot easier when dad got the Holden station wagon; with the back seat down the Holden became a modern-day bookmobile. I can still see the lending libraries in Douglas Parade and Ferguson Streets Williamstown and the one in Anderson Street Yarraville. 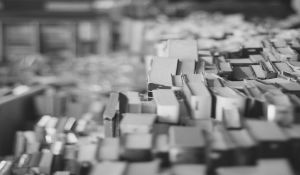 I don’t remember our front seat conversations in the Vanguard or Holden. I know we didn’t talk about circulation systems because dad didn’t know anything about the Dewey Decimal Classification system and besides the books didn’t have call numbers.

If the Vanguard or Holden was parked on the street outside of the house on weekends I would ask dad if he would unlock the door; as soon as I sat in front of the steering wheel I became Gelignite Jack Murray or Jack Brabham. Dad never left the keys so I became the car engine and driver. The steering wheel was enormous but I gripped it just like dad did on The Hill. I knew the gears because I watched dad as he mastered the busy streets of Melbourne’s suburbs: And I knew the sound of a straining, overworked car engine because the A40 had conquered Pretty Sally. My feet and legs couldn’t operate the brake, clutch, and accelerator but my left hand and arm became an extension of the steering column gear shifter. I would start each travel adventure revving the engine with a series of throaty roars, pushing my left foot down on the floor below me, and then thrusting the gear shifter to first. The engine purred in my throat through first gear until it reached the desperate sound of needing to change to second gear. I crossed the finish line first in the 1954 Redex Round Australia Reliability Trial and was the Formula One champion in 1960. Sometimes I just went for a leisurely drive without leaving the curb.

Around the bend from where the Strand meets North Road was the Warmies; water that was used for cooling was discharged from the powerhouse into the Yarra River. A steam punt guided by chains ferried cars, bike riders, and sometimes trucks across the mouth of the river from Newport to Williamstown Road, Port Melbourne; we always knew it as Fisherman Bend. You could squeeze about 32 cars on to the punt. I forget the make and year of the car that my brother, Graeme Kelly, Ron Templeton, and some others would push from Kelly’s place to the punt, and then on to the marshy grasslands and runways that surrounded the buildings of the Commonwealth Aircraft Corporation and General Motors Holden.

During wartime, the Commonwealth Aircraft Corporation made the Wirraway, Wackett, Mustang, and a fighter aircraft known as the Boomerang. I helped push the car on to the punt a few times and became a Sunday driver over the grasslands and up and down the airstrip that was home to the Boomerang.

Mum learned to drive in the Holden and she became a licensed driver. I think she drove only once or twice to the Melbourne Road shops in Newport and the once or twice to the Douglas Parade shops in Williamstown; her top speed was bout 10 miles per hour and the car bounced over the bluestones of the gutters that she always seemed to drive on. And then she drove no more. When dad took a new job at Turner Industries in White Horse, Road Box Hill the Holden became the last car we had. At first, he took the train to work; changing at Flinders Street to the Box Hill-Lilydale line. The train journey was over an hour each way. Dad became the owner of Vespa scooter. I remember him layering coats and then a raincoat on cold wintry mornings before he started on the long journey to Turner’s.

The Vespa was always parked in the front yard pushed up against the veranda. Some Saturday afternoons I would jump onto the Vespa and even though the handlebars were locked at an angle I would ride the Great Alpine Road from Myrtleford to Bairnsdale; the Vespa engine staining and humming in my throat.

Now that the Cube is discontinued from Nissan’s US lineup, I need to sit in the driver’s seat of the parked Cube on Saturday afternoons and joy ride Iceland’s Ring Road and the Tasmanian Peninsula.

Overland Adventure: The Story of the 1954 Redex Reliability Trial