The saga of the complex tear of the posterior horn and body medial meniscus, in my right knee, has, at last, come to an end. It seems so long ago since the incident, that sometimes when I think back the mental pictures show up a little fuzzy. It was a late spring morning, and the long grass on the incline in the backyard was damp and moist. My thongs were sliding and slipping on the moist grass as I pulled and pushed the motor mower across the incline. And then the inevitable; a foot sliding out of its thong. My leg speared forward. It was as if I was a well-oiled machine on the dance floor improvising an intimate Argentine Tango; leg forward with a pointed toe, leg to the right with a flexed calf muscle, and leg to the back with a dramatic rhythmic move. The medial meniscus incident ended six months later with X-Rays, MRI’s, and an arthroscopic medial meniscectomy.

I was in post-operative recovery after the meniscectomy and slowly drifting out of the anaesthetic mental fog; I saw my foot slip out of its thong and other fuzzy images of the incident. Anaesthetic logic told me that if I could work out what caused my foot to slide out of its thong then I would have worry-free, incline motor mowing. Even though my brain wasn’t fully alert it built a highlight list of the incident: spring morning, bright sunshine, blue skies, grass moist and damp, random mowing pattern, no sunglasses, mowing up and down incline, thongs. I’m like most Aussies; I love wearing thongs. When I’m talking thongs I’m not talking underwear; I’m talking about what the US and Europeans call flip flops, and Kiwis call jandals.

In 1956, Melbourne, Australia, hosted the Olympic Games. It was the first time the Olympics had been on television. I remember standing on the footpath and watching some of the Olympic events on a small black and white television, propped up in a housewares shop window. We all wondered how it was possible to watch Dawn Fraser, and Murray Rose from a footpath in Williamstown’s Ferguson Street at the same they were competing at the new Swimming and Diving Stadium; the first enclosed swimming and diving stadium used in the Olympic Games. We watched spellbound as the Japanese swimming team came to the poolside wearing getas; similar to the rest of the world, every Williamstown Olympic Games footpath television watcher became hypnotised by their entry. Because Australians wanted to wear the same casual sandals they had seen on television, some bright spark took advantage of this national yearning and started to import plastic rubber-soled sandals from Japan.

Australians called the flat rubber sole sandal with a strap passing between the first and second toes and anchored to the sole to form a Y a thong. The thong is now as Australian as Vegemite, meat pies, and pavlovas. There are two styles of thongs in Australia. A single plugger is when the thong strap is held into each side of the sole with one plug. Most Aussies consider single pluggers to be a hazard, and they should be banned; they’re only good for wearing in a caravan park shower or a camping ground toilet block. When the strap is held into each side of the sole with two plugs, the thong is a double plugger. Double pluggers are the highest standard of thongs; they’re what you’d wear out to dinner, to the pub, a wedding, or a funeral.
As my mental fog was lifting, I started to reason through each fact on my incident list whether it could cause an acute medial meniscus tear. I dismissed late spring morning, bright sunshine, blue skies, grass moist and damp, random mowing pattern, no sunglasses, and mowing up and down an incline. I thought hard about thongs and slowly remembered I had on single pluggers. That’ll do it every time. It goes without saying. If you’re wrestling with a motor mower on a damp and moist, grassy incline you’d better be wearing double pluggers. And then I appeared in my mental fog fuzzy images, wearing a pair of low riding jeans, a diamond necklace, and double pluggers; I heard myself freestyling to a rap beat. 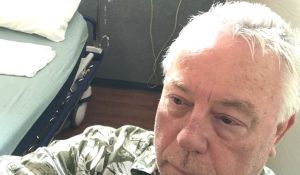 The discharge nurse brushed aside the curtain surrounding my post-operative recovery bed and handed me oxycodone, aspirin, and a senna-docusate tablet. The narcotics immediately caused my mental fog to become a little thicker. I thought I heard the nurse detailing my Discharge Activity Instructions, each one punctuated with; do you have any questions.

Rest today. Activity as tolerated
Have a responsible adult present to help you for the next 24 hours
Do not make important decisions for the remainder of the day
Apply ice to the surgical area as instructed by your nurse
No tub bath, soaking or swimming
Do not drive or operate machinery for 24 hours while taking narcotic medications

Maybe it was opioid-induced confusion that caused my bafflement about the last activity. I asked; is it OK to wear double pluggers and sit on heavy machinery while taking oxycodone?

As I was removing the hospital gown, and fiddling around putting my just operated on knee into the leg of my shorts, I mulled over the Discharge Activity caution of not driving and operating heavy machinery, or performing any dangerous tasks if you’re taking narcotic medication. I had to be experiencing opioid-induced distraction because my brain was coming up with more questions than answers. I sat and pondered about four unexceptional, average jobs, and I wondered if they could be compromised, or improved, by narcotic medication.

The official corsetiere to Her Royal Majesty has to be a hazardous job even if you’re not on narcotic medication; whenever you’re pulling, carrying, or moving a vibrating regal something you’d have to be treading on dangerous grounds. I seem to remember that most members of the British Royal family, including Queen Elizabeth, the Queen Mother, and Princess Margaret, had somewhat overlarge breasts. I thought about the inherent dangers for the royal bra fitter if they were experiencing opioid-induced disorientation and were requested by the Queen to fit her with a cone or bullet-shaped bra.

Body painters are becoming a mainstay at fairs, festivals, and parties; and face painters are replacing magicians and clowns at most little one’s birthday parties. What if a face painter was on narcotic medication and in their mixed-up confusion didn’t stop painting a little one’s face but went all out with a full-body paint. The paint would cover the little one’s pores and stop them sweating; their bodies cooling mechanisms wouldn’t be able to work and they’d be overcome with heatstroke. And what if the face painter’s narcotic haze caused them to grab an acrylic latex paint that contained ammonia, formaldehyde and heavy metals. Say no more.

Feng Shui is the ancient Chinese art and science that manages energy; thus ensuring wealth, wellness, and good fortune. Feng Shui consultants blend colour, light, and arrangement to encourage positive energy flow. I experienced positive energy flow in the early seventies when travelling the hippie trail to Kabul. I walked across the Iranian border into Afghanistan and headed toward a collection of buses. As soon as the small, crumbled bus started to slowly move, several Afghan passengers began sharing their homemade cigarettes; a blend of tobacco and the best Afghan narcotic. The outside clouds formed amorphic beasts in the sky; shapeless creatures appeared and transformed into other creations, and the mountains in the distance became living shapes venting their energy fields. All I know is that there was a lot of Feng Shui on the road to Kabul.

I was first introduced to queue standers at Calcutta’s Howrah Railway Station. I remember thinking that all of Calcutta had to be at the station; half inside and half outside. The chaotic confusion was a blur of motion; and noise, smells, accents, travellers, porters, vendors, wandering cows, and tea sellers. I looked at the crowd at the ticket counters; it’d be more than an hour to reach the ticket windows. I felt a nudge and turned. The queue stander said he’d wait in the ticket queue for me. And now years later, line standing has become an occupation in the US. Long lines, and long wait times, are now the norm for the release of the latest tech gadgets, retro Nike Air Jordan shoes, Black Friday shopping specials, ABBA concert tickets, and celebrity meet and greets. The most common complaints among people whose job requires prolonged standing are: sore feet, swelling of the legs, varicose veins, general muscular fatigue, low back pain, and stiffness in the neck and shoulders. As line standing demands increase, the number of queue professionals being prescribed oxycodone and aspirin medication for their common complaints will increase. Because Discharge Activity Instructions include: rest and activity as tolerated, have a responsible adult present to help you for the next 24 hours, and do not make important decisions for the remainder of the day a queue professional will end up in a confused state sitting or laying, for hours on end on the footpath. It goes without saying that Queue professionals will be arrested as homeless people.

And now you’ll need to excuse me. Even though the grass in the back is still a little damp from last night’s rain I need to start mowing before the morning is done. I’ll need to find my double pluggers to wear because I’ve come to the conclusion that pushing a motor mower around an incline isn’t something that can be done wearing flimsy sandals, runners, or single pluggers.

Aussie Icon Has The World At Its Feet

A Global Guide To Queuing Philosophies, From Wimbledon To São Paulo