It seems that in the near future, whenever we travel to foreign countries, we may very well have to present a vaccine passport to provide proof of vaccination against Covid-19. Some academics and human rights groups are voicing concerns about these new vaccine passports. They suggest it may be discriminatory against those waiting for a vaccination, anyone who can’t have a Covid vaccine for medical or religious reasons, and persons who reject mandatory immunisation because they control and decide what goes into their body. Other flustered persons have expressed concerns about their privacy and the ease of hacking a digital vaccine passports information. Now I’m not sure what the big deal about a vaccine passport is about because having to prove you were vaccinated to enter a foreign country is not a new concept.

When I was wandering Europe, the Middle East and Asia along the ill-defined hippie trail, I carried a passport, Barclay’s travellers’ chequers, a fake international student card, an international drivers licence, and the World Health Organisation’s International Certificate of Vaccination. The certificate was a yellow booklet known colloquially as the yellow card. Different countries had different mandatory immunisation requirements, and the yellow card became a vaccine passport to be checked at border crossings for the required vaccinations and if they were current before you were approved to enter. Travellers got the vaccinations needed for each country. We were concerned about our health and well being and the adventure of travel, and didn’t worry about who controls and decides what vaccines go into our bodies.

By the sixties, most communicable diseases in Australia were controlled by routine childhood vaccinations and high living standards. Like most Australians growing up in the fifties, I was inoculated against diphtheria, tetanus, and polio, but not smallpox. Back then, smallpox wasn’t widespread in Australia, so there were no mass vaccination programs for the disease. I’d seen photos of smallpox victims, and they caused me to have the same fear of it as I did for polio. Australia experienced a major polio epidemic in the late fifties. I remember seeing images of children laying immobile in bed suffering from paralysis and pictures of others with their heads jutting out from iron lungs. John Tillerson, lying immobile on a flat wooden cart with bicycle wheels, was one of the pictures come to life. 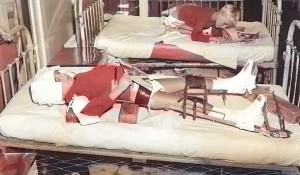 Whenever we played cricket in the street, the electricity pole was the wicket, and the gutter was the crease. The electricity pole wicket was a couple of houses down from the Tillerson’s. If we were playing cricket on a warm summer day, Mrs Tillerson would wheel John out of the front gate and onto the footpath on a flat wooden cart. He’d watch us play laying stretched out along the length of his wooden cart. John had polio, and his unbendable legs were in iron braces. We called him Tin Legs Tillerson, but not to his face.

During the fifties, sixties, and early seventies, ships from Lloyd Triestino, Chandris, Sitmar, and P&O made up the immigration conveys sailing from England, and Europe, to Australia. It was commonplace to see the Fairsea, Arcadia, Patris, and Galileo docked at Port Melbourne’s Station Pier. When the ships left Melbourne to return to their home ports, the government-assisted migrants and Ten Pound Poms they carried to Australia were replaced by twenty-something-year-old Aussies starting their hallowed rite of passage, a two-year working and travelling holiday of England and Europe.

I boarded the S.S. Galileo with a yellow card having signed stamps showing the date of vaccinations for smallpox, malaria, diphtheria, yellow fever, cholera, typhoid, tetanus and hepatitis. Protection against diphtheria, yellow fever, cholera, typhoid, and tetanus was somewhat standard for the hallowed rite of passage. Because I was unsure of where my travelling while searching for inspiration and idealism in the ordinary would lead me, I thought vaccination against smallpox and malaria would be a plus. All I remember about getting the smallpox vaccination is the cautionary words of the doctor infecting me. 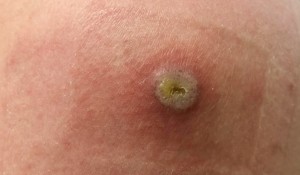 A few days after getting the jab, a liquid-filled blister appeared on my left arm, where the doctor pricked my skin with the vaccination needle. I covered it with a band-aide to help me with resisting the urge to scratch at the itchy, fluid-filled blister. Whenever I changed the band-aide, I couldn’t help but look at the blister filling itself with pus, and that caused me to remember the photos I’d seen of children with smallpox; their face, upper arms, and body covered in small pus-filled blisters. I’m not sure if I threw the scab in a paper bag when it fell off and if I tossed it into the rubbish bin or not.

It took two months to travel by ship from Australia to Durban, up the coast of Africa to the Canary Islands and stopping in Messina, Naples and Genoa. I began my rite of passage in the mother country, sharing a small room in a Tooting Bec three storey row house with my Aussie travel mate and four English lads. During the long hot summer, I worked as a lifesaver at an outdoor swimming pool nestled in the corner of south London’s Brockwell Park. A few weeks before summer’s end, my Aussie travel mate and I bought a 1960’s Ford Angelia panel van with money we saved from our summer lifesaving jobs. It was a small dark blue van without windows, similar to a fruiterers delivery van or what you’d see on a London street while watching a baffling Scotland Yard mystery feature film.

At summer’s end, we both were without jobs, so we made a deep and thoughtful decision; we’d search for inspiration and idealism in the ordinary by driving our Ford Angelia van across Europe and then follow the Hippie Trail from Turkey through the Middle East to India. With the Ford Anglia van safe in the bowls of a drive-on drive-off car ferry, I spent the cross-channel journey from Dover to Belgium in the ferry’s lounge drinking pints of warm beer. In those days, I thought of Europe as an adult Luna Park; a hallowed rite of passage experience. Twenty-something-year-old Aussies didn’t go to Europe to find history, culture, and sophistication but went there for adventure, thrills, and naughtiness. During the next several weeks, the Anglia took us along the highways, laneways, narrow winding roads, roundabouts, and through the villages, towns, and cities of Germany, France, Italy, Yugoslavia, and Greece. At night we parked in village squares, side streets, and out of the way places and nestled into our sleeping bags in the back of our trusty van. At border crossings, our passports were stamped, and on-demand showed what was now our tattered yellow card.

The Plaka, in the shadow of the Acropolis, is the oldest section of Athens. In the early seventies, pastry shops, old men playing backgammon, nightclubs, and street vendors selling the best tasting souvlakis filled its streets. We parked the Anglia in the streets of the Plaka, and it became our bedroom in Athens. During the day, I walked the twisted, hilly, narrow streets of the Plaka and wandered to the Acropolis. I sat alone among the Parthenon stones and watched Athens stretching itself into the distance. Because I needed up to date vaccinations for Turkey and Iran, Afghanistan, Pakistan and India, I checked my yellow card a few days before leaving Athens when I was sitting peacefully on one of the Parthenon stones. Some vaccinations needed updating, so I headed off to a hospital on one of Athen’s main streets for the round of new vaccinations. I don’t remember getting the updates, but my tattered yellow card was newly date stamped, the dosages noted, and signed by a Greek health specialist.

In the Hippie Trail days, the streets surrounding Istanbul’s Blue Mosque were the parking garages for Magic buses, Volkswagen Kombis, old Royal Mail vans, and a collection of unroadworthy minivans. We parked the Angelia in the shadow of the Mosque and enjoyed Istanbul for the next week or so. I’d begun to practice the traveller’s ritual of finding a bank to cash a traveller’s check, changing leftover money into a different currency, checking for required visas, and checking vaccinations are valid for the upcoming border crossing a few days before leaving for a new country. In the shadow of the Mosque, I discovered my Aussie travel mate and I had overlooked a lapsed vaccination in Athens; we needed to find someone in Istanbul to vaccinate us.

Fellow travellers who were sharing the Blue Mosque parking garages told us the whereabouts of a doctor who gave vaccinations. My travel mate and I trusted the owner-driver of a classic 1950’s American car, come Istanbul taksi dolmus, to find the doctors house somewhere in Istanbul. The consulting room was a small room with a table and a medicine cabinet on the wall above a sink. The doctor entered the room, took a syringe from the table drawer, turned toward the wall-mounted cabinet, and motioned both of us to bare an arm for the vaccination. He filled the syringe with the liquid from a vial he took from the cabinet. My travel mate raised his hand to signal he would be first. The doctor plunged the needle into his arm and released the serum. In an instant, he spun around, jabbed the needle into my arm, and emptied the syringe of the leftover serum. He recorded the dosages, dated, stamped, and signed our tattered yellow cards. I offered him Greek drachmas for his services; I hadn’t cashed a travellers check or changed money before leaving Athens.

I wonder if the doctor with the small consulting room in Istanbul is equipping it with the necessary technology to interact with the fast data rates and greater capacity of the next-generation communication networks in anticipation of someone with a digital vaccine passport knocking on his door. Maybe it would be better if the Covid vaccination left a scar similar to the smallpox vaccination; if so, you could wear your vaccine passport on your arm.

The 1970s Hippie Trail: Drugs, Danger, and a Magical Pudding Shop in Asia

A Short History of Vaccination Campaigns in Australia