Two of the things that trigger a decoder ring are a curriculum vitae and the eulogy at a funeral service: Nowhere is the truth or reality spun so much. Failures are turned into success, negatives into positives, and the ordinary into the remarkable.

And so I share the short history of the John McAdam with a liberal dose of spin.

I was born in Williamstown, Victoria, Australia, and spent my childhood and teenage years at Peel Street Newport. It was accepted that Yarra Street, a couple of streets down from Peel Street, divided Newport from Williamstown.

Historic Williamstown is located on a small peninsula across Port Phillip Bay from Melbourne. It was to be the capital of Victoria but Melbourne was chosen because of the supply of freshwater. Williamstown became Melbourne’s first port and the suburb is rich in maritime history, bluestone buildings, federation houses, and an incredible view of the Melbourne skyline: encased in a cosmic time bubble until 1980 gentrification.

Williamstown was a sound stage for scenes for the 1959 movie On the Beach. I remember riding my bike down to Nelson Place and the Breakwater piers to catch glimpses of Gregory Peck or Ava Gardner. We road bikes everywhere: to the beach, to school, to Sandy Point, Gem Pier, and to the Warmies and the Punt. The best I remember of our gang is; Andrew Lambrainew, Ray Cowmeadow, Alwyn Robertson, my brother Peter, and sometimes Froggie Norton and Butch. We played cricket, end to end footie and built bonfires on the Strand by the mouth of the Yarra River. On foggy winter nights, I would be put to sleep by the mournful fog horns warning cargo ships of the close foreshore as they navigated the Yarra estuary. The house in Peel Street was just one block away from the foreshore.

What an idyllic age of innocent; my very own childhood hometown of Seahaven.

I had to make my first life-changing decision when I was seventeen; attend Caulfield Institute of Technology to study Art or attend Footscray Technical College to study Engineering or Chemistry. Caulfield was a train journey via Footscray to Melbourne then another 20-minute train journey: Footscray was a short 10-minute train ride. The future John McAdam was decided by the duration of a train ride: and I chose chemistry because I wasn’t good with lathes and drill presses.

I started to discover learning opportunities other than formal classes at Footscray Technology College. I entered the world of change and uncertainty: rock and roll, sixties and seventies women, alcoholic oblivion, the Stones, Who and Kinks, and more: My predictable childhood, my Seahaven, was becoming a memory.

After Footscray Technical College I carelessly flitted between an industrial chemist and teaching Math and Science in the Victorian Education Department for a few years: And then arriving in swinging London to become a Life Guard at Herne Hill outdoor swimming pool. Swinging London was winding down. Carnaby Street was drifting past its heyday but the Beatles were still laying the foundations for, T Rex, Queen Elton John, and others. Hitchhiking through England, Scotland, and Europe and travelling overland in buses and trucks through the Middle East to India my predictable childhood, my Seahaven was forgotten.

Seventies women, alcoholic oblivion, and Daddy Cool, Billy Thorpe and the Aztecs, Russell Morris, The Captain Matchbox Whoopee Band, and Skyhooks: There is a lot I don’t remember from the seventies. I went back to teaching Math and Science when I returned to Melbourne but interrupted what was becoming a vocation with a sojourn to South East Asia, Burma, Nepal and India, and the Middle East. I think I rebelled against my predictable childhood, my Seahaven, and whenever I came to a fork in the road I took it; without planning and without knowing the outcome. Maybe that is why I was attracted to the seventies “Schools without Walls” revolution. Along with others at one of the schools I was teaching at I pondered and questioned the effectiveness of rote learning and was fortunate to be part of the open classroom movement. We became a one of a kind showcase school. 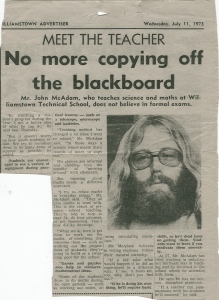 I returned to college seeking an advanced degree in Instructional Technology, sometimes called Instructional Design and no sooner had I graduated when I took the fork in the road again. I left Australia for a short stay in the US. For close to thirty years, I enjoyed being a member of a dynamic community college instructional design team responsible for infusing technology into learning and redesigning its delivery for students. I was a digital immigrant travelling without GPS through the still shaping cyber landscape; our only plan was to use technologies to create new learning environments and experiences.

I’ve also enjoyed being a Patient Simulator, transporting clients for a State County of Mental Retardation, directing and acting in Community Theater, receiving food stamps, and doing my best to resist a complete cultural transformation.

After spending half a lifetime as a permanent resident alien I’m now a US citizen; I hold both Australian and US citizenship.

6 thoughts on “The John McAdam”