I’ve often described our early thirties house as a charming two storey revival brick Tudor cottage. We became the second owners of the charming cottage thirty-plus years ago. It still had the original exterior architecture, and the interior was as it was when built. I was tickled pink to be living in a cottage with a slate roof, and I often sat on the small front lawn, close my eyes, and think I was living in Dorset or East Sussex. The first upgrade we did to the house was to install new electrical wiring and replace the screw-in fuses with a circuit breaker panel. The second major upgrade was to replace the octopus heating system and the two window air conditioners with a heating and air conditioning system. When the time came to rebuild the kitchen and bathroom, we focused the remodelling on maintaining the integrity of the 1930’s design of the house.

Over the years, the house demanded small and sometimes medium maintenance work. Some homeowners attach metal trim to a houses wood fascia to protect it from water and insect damage and inhibit paint peeling and fading. Forty-plus years ago, the East Sussex cottages wood fascia boards were covered with brown aluminium trim, and hammering nails back into the metal fascia trim to refasten it to the fascia became a yearly medium maintenance work activity. May and June are the peak months in Nebraska for severe weather; storms strike quickly and can produce thunderstorms with heavy rain, strong winds, lightning, hail, and tornadoes. After every severe storm, it became common practice to find strips of aluminium fascia trim on the ground or flapping in the wind along the roofline. I did my best to temper my concern about heights and would gingerly climb the ladder to try and hammer sections of the brown aluminium trim back onto the cottage’s fascia.

Three years ago, two long lengths and a smaller section of the aluminium fascia trim fell from near the twenty feet from the ground roof peak and exposed dried out warping and cracking water damaged wood. I collected the two twisted sections of fascia trim and put them in the garage for safekeeping. Over the next few years, I nailed bits of fallen bent brown aluminium trim back onto ladder height wood fascia. Strong winds in early April 2021 caused new small strips of trim above the garage to come loose. By standing on the garage roof, I could reach over the house’s front curved brick roof-line and juggle the strips of trim back into place; I struggled to pound an assortment of nails through the trim and into the fascia board. A shower of softwood shards fell out from behind the trim where I was hammering. The fascia was water damaged, dried out and cracking. It was my first exposure to fascia board rot. After years of reattaching fascia trim and now coming face to face with wood rot, it was time to get rid of the brown aluminium trim and replace any damaged wood fascia board.

I thought back to my third and fourth form woodworking classes at Williamstown Technical School and wondered if they’d prepared me to replace the wood fascia. Most of the time, the projects in woodworking involved planing wood or shaping wood with a spokeshave or wood chisel. But I did get to make a tenon and mortise joint, a pencil case with a swivel lid, and fashion a hexagonal wooden copper stick with a rounded handle from a length of 3-inch x 3-inch wood. I proudly gave mum my copper stick, which she used on her washing days until the washing machine replaced the copper.

The verandah on the back of the house where I grew up was a classic add on Australian lean-to. Its flat corrugated roof abutted the pitched corrugated roof of the house. I remember when dad and granddad spent weekends on end rebuilding the old back verandah. They installed new four by four uprights, ripped out the old wooden lattice, built a waist-high tongue and groove wood wall, and installed louvred windows from the top of tongue and groove to the roofline. The corrugated tin roof was left untouched. The remodelled verandah became known as the fernery, and mum kept her potted plants on shelves along the bathroom wall at one end of the fernery.

Three pitched roof sections, one on each side and one at the front of the house, formed a U shape around the house. There was a small flat roof surface where the valleys of the rooves met at the bottom. As a youngster, I never had a concern about heights, and I’d prop dads wooden ladder up against the back door of the fernery and climb onto the roof. It was a playground to run around on, kick a footie from into the backyard, or catch whatever my brother threw at me from the backyard. And the roof was my haven when I was a lonesome teenager. I’d walk-crawl up one of the valleys, sit atop the roof, and think about what would shape and determine my fate and make me the person I was yet to become.

When I looked down Douglas Parade, I could make out Dashers Milk Bar. It’s where our pushbike gang of five would sometimes gather on Saturday arvos to buy a Tarax, a Peters ice cream, or a bag of mixed lollies. We never knew Mr and Mrs Dashers real name; we called them the Dashers because we thought they moved so slow. On top of the counter at the back of Dashers was a wooden display case with a hinged glass lid, which an ophthalmologist today would diagnose as having cataracts. The scratches caused by the knurled edges of hundreds of threepences, sixpences, and pennies rubbed along the glass as tortured choices were made from the assortment of lollies in the case for a threepenny bag of mixed lollies, caused the lid to be dull and opaque. Dasher counted out the choices, and when you’d spent your threepence, he handed over a small white paper bag with a mix of clinkers, fruit tingles, choo-choo bars, black cats, musk sticks, mint leaves, or milk bottles. You were lucky if the bag of lollies lasted through the afternoon, which went to show you can’t have your lollies and eat them. 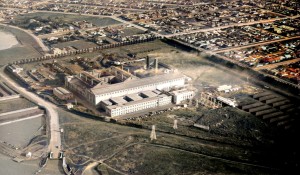 I only gave the Power House at the back of mum’s house a passing glance of contempt. It was built n 1918 by the Victorian Railways to supply electricity for Melbourne’s burgeoning suburban railways. Melbourne’s demand for electricity increased, and the powerhouse expanded to become the largest in the southern hemispheres. Briquettes eventually replaced coal to fire the boilers, and briquette soot became the scourge of the neighbourhood. When the boilers fired up, the powerhouse chimneys spewed clouds of soot over the surroundings. The soot was the bane of mum’s washing day life. When the wind started blowing toward our house, her sun-dried washing became covered with black, gritty soot. Mum seemed to sense the presence of the soot, and a guttural cry of soot, soot, echoed through the house. She lived by the adage you should never air your dirty washing in public, so she ran to the backyard, gathered the washing from the rotary clothesline and hastily returned it to her soaking troughs. 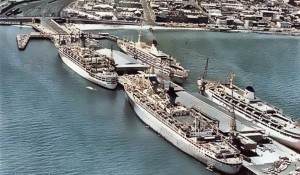 When I looked toward the Strand, in the distance was Station and Princes Pier, and they seemed to be always cluttered with ships of the Lloyd Triestino, Chandris, Sitmar, and P&O lines. I couldn’t read their names, but I knew from the colours of their funnels if they were Chandris or Sitmar. They made up the immigration conveys sailing from England and Europe, bringing government-assisted migrants and Ten Pound Poms to their new home in Australia. When the ships left Melbourne to return to their home ports, they carried twenty-something-year-old Aussies starting on their traditional hallowed rite of passage, a two-year working and travelling holiday of England and Europe. I sat on the pitched roof ridge squinting at the passenger ships, daydreaming about the adventures awaiting me in unknown exotic lands and ports of call. Sometimes I just stared at the berthed ships and watched people frolicking in the water at Port Melbourne beach and wondered if they were swimming out to meet their ship that didn’t come in.

Why the Tin Roof is an Australian Icon